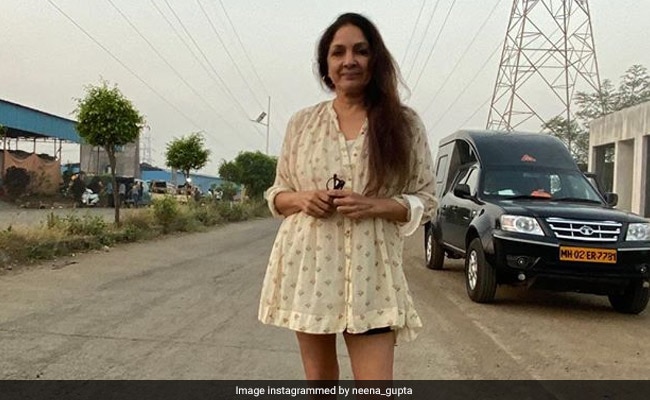 Trust Neena Gupta when it comes to sharing posts with hilarious captions. The reason we brought this up today is because the actress, on Saturday, shared a beautiful picture of herself on her Instagram profile but it is her caption that is breaking the Internet. In the photograph, clicked by Neena Gupta's Badhaai Ho co-star Gajraj Rao (as she mentioned in her post), she can be seen posing for the camera dressed in an off-white short dress. Sharing the photo, Neena Gupta accompanied it with an epic caption and wrote: "Frock ka shock." Here's the photo we are talking about:

Did you like Neena Gupta's frock ka shock? Tell us in the comments section.

Like we said above, Neena Gupta is the queen of epic captions. She once shared a photograph of herself from her shoot and captioned it: "Lallu but swag!." LOL. Take a look:

And do you remember her "Pankh hote toh udd aati re" video? If not, check it out now:

Our favourite is the one, in which she could be seen posing with Gajraj Rao in London. Sharing the photo, she quoted a part of the lyrics of the song Jahan main jaati hoon wahi chale aate ho in her caption. Take a look:'