Neena Gupta Sang At A Party. Watch Her Killing It

In the clip, she can be seen singing Ab Ke Baras Bhejo Bhaiya from the 1963 film Bandini 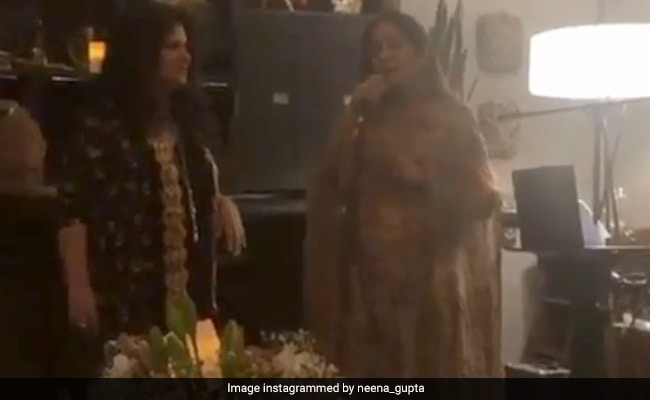 Actress Neena Gupta posted a video of herself trying her luck in the field of singing and she nailed it like a pro. The Badhaai Ho actress shared the video on her Instagram profile on Tuesday. In the clip, she can be seen singing Ab Ke Baras Bhejo Bhaiya at what appears to be a party. She can be seen wearing a kurta-salwar and holding a mic for her performance while her friends can be heard cheering her in the video. The song has been originally sung by Asha Bhosle in the 1963 film Bandini, which featured Dharmendra and Nutan in the lead roles. Instagramming the clip, Neena Gupta captioned it in Hindi. She wrote: "Koshish karne mein kya jata hai?" We agree with you, Neena Gupta.

Neena Gupta's performance left her fans amazed, who then flooded her post with comments such as "lovely singing" and "So touching... Well sung." One user wrote in the comments section: "Very emotional... This song brought tears in my eyes."

Neena Gupta often delights her fans with hilarious and epic social media posts. In one of her previous posts, she shared a video of herself and her Badhaai Ho co-star Gajraj Rao taking the Don't Be Shy Again challenge for their friend Ayushmann Khurrana to another level. The challenge was a part of the promotional activities for his film Bala. Neena and Gajraj have worked with Ayushmann in Badhaai Ho.

On the work front, Neena Gupta is prepping for Shubh Mangal Zyada Saavdhan, in which she will reunite with Ayushmann Khurrana and Gajraj Rao. She has also Ashwiny Iyer Tiwari's Panga and Rohit Shetty's Sooryavanshi in the pipeline.