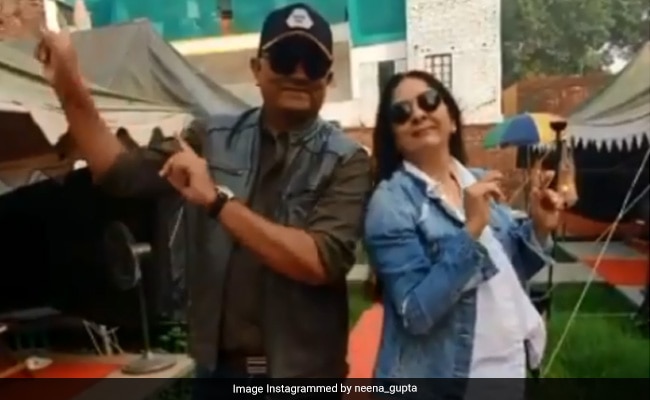 Gajraj Rao and Neena Gupta in a still from the video. (Image courtesy: neena_gupta)

Veteran actors Neena Gupta and Gajraj Rao are the latest addition to the list of celebrities to take up the Don't Be Shy Again challenge. For those who don't know, the viral Don't Be Shy Again challenge is a promotional activity for Ayushmann Khurrana's upcoming film Bala, as a part of which Bollywood stars are nominating their colleagues to share videos of themselves dancing to the song Don't Be Shy Again from the filmBala. Neena Gupta and Gajraj Rao, who played Ayushmann Khurrana's parents in the 2018 film Badhaai Ho, shared a video of themselves dancing to the popular track. It wouldn't be wrong to say that the actors aced the challenge and how.

Sharing the video on her Instagram profile on Tuesday, Neena Gupta wrote: "Don't need you, I can touch my body." The actress nominated her Badhaai Ho co-star Sanya Malhotra for the challenge. Neena Gupta's daughter - Fashion designer Masaba Gupta commented on the video. She wrote: "I don't think I can handle it anymore."

As of now, Arjun Kapoor, Varun Dhawan and Ayushmann's brother Aparshakti Khurana have taken up the challenge. Aparshakti shared separate videos of himself dancing with the stars. Take a look at the video here:

Bala actor Ayushmann nominated Varun Dhawan, Arjun Kapoor, Aparshakti Khurana and Varun Sharma for the challenge. Sharing the video, he wrote: "Taking the #DontBeShyAgain Challenge a notch higher. I have challenged my buddies, have you?"

Other than Ayushmann Khurrana, the film also stars Bhumi Pednekar, Yami Gautam and Saurabh Shukla. Directed by Amar Kaushik, the film is slated to release on November 7.