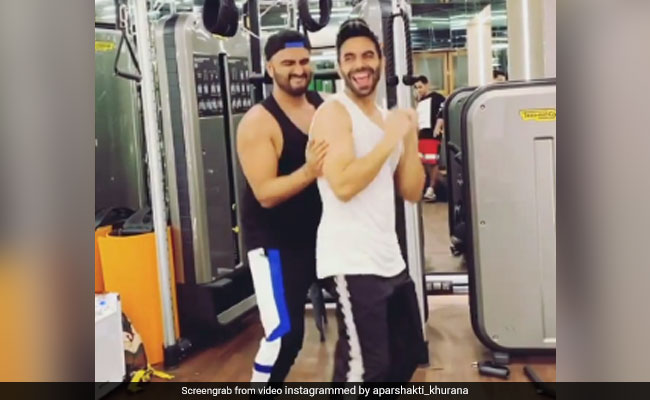 Arjun Kapoor and Aparshakti in a still from the video. (Image courtesy: aparshakti_khurana)

We just love social media challenges, especially the ones that feature our Bollywood stars. The reason we brought this up today is because there's a new challenge that is doing the round on social media - 'Don't Be Shy Again' challenge, which is a promotional activity for Ayushmann Khurrana's upcoming film

Sharing the video with Arjun Kapoor, Aparshakti Khurana wrote: "Trying very hard to not be shy but with Arjun Kapoor just can't help it." He added the hashtags #DontBeShy and #TakeUpTheChallenge to his post. Check out the video here:

Aparshakti posted a video with Varun Dhawan and he captioned it: "Don't be shy ladies and gentlemen. Take this challenge right away like Varun and I did. All the love to Bhratashree." They further nominated Sanya Malhotra and Ananya Panday to take up the challenge.

Ayushmann shared this video on social media and wrote: "Taking the Don't Be Shy Again Challenge a notch higher. I have challenged my buddies, have you?"