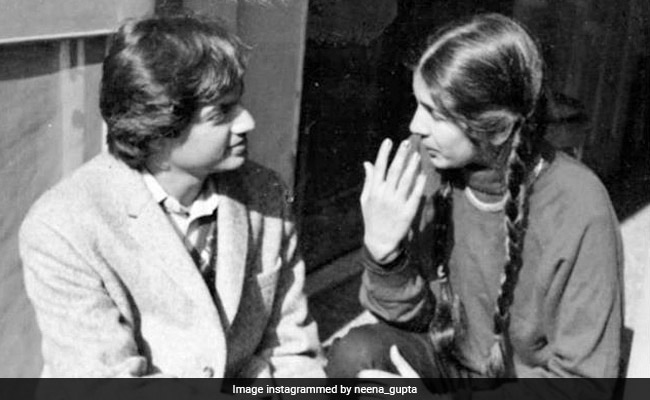 Neena Gupta's latest post on Instagram will make you feel nostalgic. In case you are wondering why, here's the reason. On Sunday, the actress shared a really old picture of herself having a chat with Joy Roy, the son of veteran filmmaker Bimal Roy, who died in January 1966. In the black and white photograph, Neena and Joy can be seen sitting on stairs. Going by the post, it appears that Neena is explaining something to Joy. Sharing the post, Neena Gupta kept the caption simple and short and wrote: "Uff, so long ago. Thank you, Joy Roy." Bimal Roy was a renowned director, who delivered several hits like Do Bigha Zamin, Parineeta, Biraj Bahu, Madhumati, Sujata, Parakh and Bandini in his career.

Uff so long ago thank u joy roy

Neena Gupta frequently delights her fans by sharing million-dollar throwback pictures of herself. Last month, she posted a still from the 1993 Sanskrit film Bhagavad Gita: Song Of The Lord, in which she played the role of Draupadi. In the throwback photo, Neena could be seen sporting a red bindi, a nose ring, a gold necklace and earrings. Take a look:

We have collected her other throwback pictures for you. Check them out (You can thank us later).

On the work front, Neena Gupta has featured in several films such as Who Chokri, Aadat Se Majboor, Yeh Nazdeekiyan, Aadharshila, Jaane Bhi Do Yaaron, Utsav, Laila, Trikaal, Batwara, Swarg, Vasthuhara, Balwaan, Yalgaar, Angaar, Suraj Ka Satvan Ghoda, Uff! Yeh Mohabbat and Veere Di Wedding to name a few. She was last seen in the recently-released film Shubh Mangal Zyada Saavdhan, in which she co-starred with Ayushmann Khurrana, Jitendra Kumar and Gajraj Rao. The actress will next be seen in a special appearance in Kabir Khan's '83, which will star Ranveer Singh in the lead role.