Neena Gupta Reveals Her Father Helped Her Raise Daughter Masaba As A Single Parent: "He Was My Backbone"

"My father played a very important role in raising my daughter, he especially shifted to Mumbai to help me," said Neena Gupta 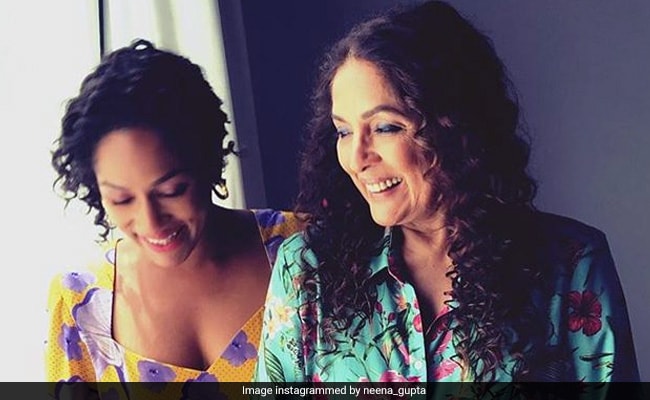 Shubh Mangal Zyada Saavdhan actress Neena Gupta occupied the top spot on the list of trends on Sunday after she revealed that it was her father who helped her raise daughter Masaba as a single parent. Masaba Gupta, who is a well-known designer now, was born to Neena when she was in a relationship with former West Indies cricketer Vivian Richards in the Eighties. Neena Gupta later chartered accountant Vivek Mehra while the former cricketer got married to Miriam. Talking about raising her daughter, the actress credited her father for becoming her "backbone" during the "most crucial time" of her life. "My father played a very important role in raising my daughter. He especially shifted to Mumbai to help me. I cannot express how thankful I am to him. He was my backbone during the most crucial time of my life," Neena was quoted as saying on the sets of reality show Indian Idol 11 by news agency IANS.

Neena opened up about her life as a single parent after contestant Rohit Raut's (who was also raised by a single parent) performance left her emotional. Appreciating Rohit, the actress told him on the show: "I don't know what to say after such a marvellous performance and I feel so lucky to watch such a great performer live," reported IANS.

Neena Gupta has spoke about her past and her life as a single mother during several interviews. Earlier, talking to Mumbai Mirror, when the actress was asked to talk about the one decision from her past that she would like to reconsider taking, she said: "I would not have a child outside marriage" and added: "Every child needs both parents. I was always honest with Masaba, so it did not affect our relationship, but I know she suffered."

Neena Gupta has won critical acclaim for her performance in 2018 drama comedy Badhaai Ho. She was last featured in Shubh Mangal Zyada Saavdhan, which released this Friday. Neena Gupta will next be seen in Rohit Shetty's film Sooryavanshi.