If Neena Gupta Could Go Back In Time: 'I Wouldn't Have A Child Outside Marriage'

"Every child needs both parents," Neena Gupta said in the interview 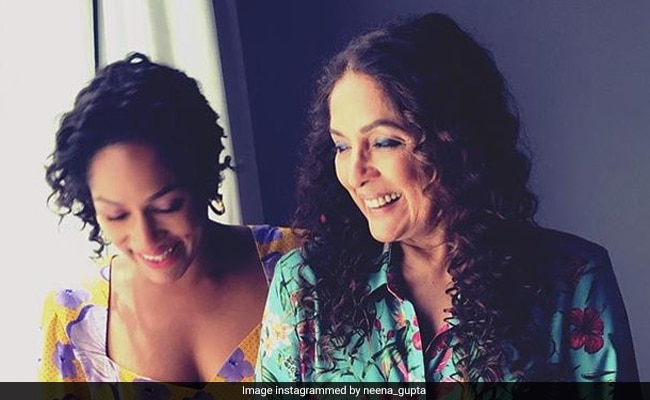 Actress Neena Gupta, in an interview with Mumbai Mirror, was asked to talk about the one decision from her past that she would like to reconsider taking, when she said: "I would not have a child outside marriage." Neena Gupta's daughter Masaba Gupta, who is now a well-known designer, was born to her when she was in a relationship with former West Indies cricketer Vivian Richards in the Eighties. Vivian Richards later married Miriam while Neena Gupta got married to chartered accountant Vivek Mehra. Explaining her answer, Neena Gupta told Mumbai Mirror that: "Every child needs both parents. I was always honest with Masaba, so it did not affect our relationship, but I know she suffered."

Masaba Gupta married filmmaker Madhu Mantena in 2015. However, they announced their separation in 2018 and filed for divorce last year. "I just told her 'soch lo', then, I was respectful of her decision," Neena Gupta told Mumbai Mirror.

Masaba Gupta was 19 when Neena Gupta married Vivek Mehra in 2008:

Please meet 19year old muscular 'chaata -wala' at mum's wedding 10yrs back. HOT as hell & I'm sulking because I thought pandits in the US did compact versions of stuff. But no,brotherman went on & chaata-wala baked under the American sun. I have a feeling mom's reminding me that the Umbrella was for her. love you both!

Masaba Gupta often shares throwback memories, featuring her father Vivian Richards. Masaba also shared glimpses of a reunion of sorts when she and Neena Gupta met Vivian Richards in Dubai on his birthday.

Sweet but could bite.

In 2017, Masaba shut down trolls, who referred to her as "illegitimate West Indian" for supporting cracker ban. "Call me these names if it makes you feel glorious. But know this... I am a proud Indo-Caribbean girl who doesn't know how to shrink and crumble in shame of something you or your society cannot handle. It's just in my 'illegitimate' genes," she tweeted:

Neena Gupta was critically acclaimed for playing the role of a middle-aged housewife dealing with an unexpected pregnancy in Badhaai Ho. Her next film is Panga, in which she features as the mother of a former Kabaddi champion, played by Kangana Ranaut. Neena Gupta also has Shubh Mangal Zyada Saavdhan in the line-up, in which she reunites with her Badhaai Ho co-stars. The 60-year-old actress also has a cameo in Ranveer Singh's '83.