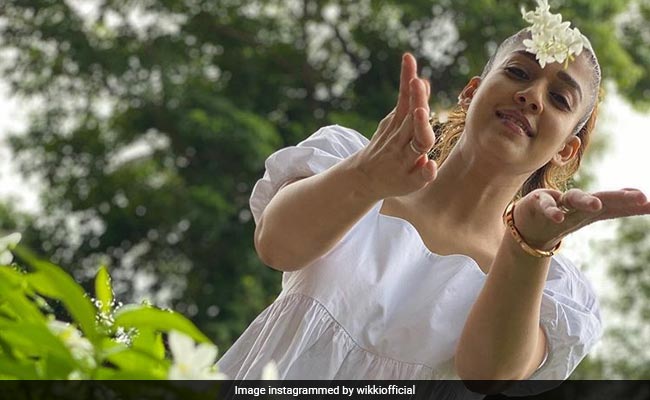 South star Nayanthara and her boyfriend, director Vignesh Shivan, are making memories in Goa. The couple, who were living together in Kochi during the coronavirus lockdown, took a break from their everyday routine and flew to Goa for much needed relaxation. Pictures from their getaway were shared on social media by Vignesh Shivan. The photos, clicked by the director, feature Nayanthara enjoying the greenery at a private place in Goa. In one of the pictures, Nayanthara can be seen sporting a polka dot dress and stepping into a pool. "White is always wonderful," Vignesh captioned one of the photos from their trip while sharing another, he wrote: "Stepping into vacay mood after the mandatory holiday mode."

Going by the holiday pictures, it looks like Vignesh Shivan's mother also accompanied the duo on the trip.

The Smile on your mother's face is directly proportional to the happiness in your heart Nothing gives u more satisfaction & fulfilment than your parents' happiness the ideal Aim of life should be to keep your parents happy & content ! #familytime #familyiseverything #nofilter #shotoniphone11promax #shotoniphone

A couple of days ago, Nayanthara and Vignesh Shivan trended big time on social media, courtesy photos from their Onam celebrations. In case you haven't seen the pictures yet, take a look now:

Nayanthara and Vignesh Shivan met on the sets of 2015 film Naanum Rowdydhaan, which Vignesh directed. It featured Nayanthara in the lead role. They fell in love soon after that. Earlier, speaking about their wedding, Vignesh Shivan told Tamil website Behindwoods: "Our focus is still on work. Let's see... When we will get bored with dating, we will get married. When we do decide to get married, we will let you guys know."

Before the nationwide lockdown, Nayanthara was filming Netrikann, produced by Vignesh Shivan. Directed by Milind Rau, Netrikann is a remake of Korean film Blind. Nayanthara will also be seen alongside Rajinikanth in Annaatthe.