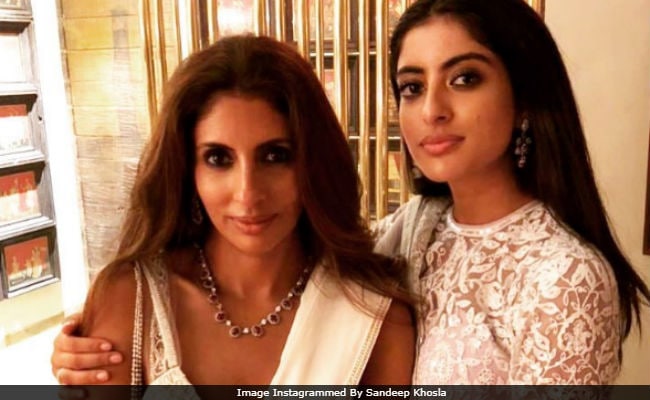 New Delhi: Diwali is here and so, the celebrities are busy partying with friends and family. Shweta Bachchan Nanda, her daughter Navya Naveli, actor Abhishek Bachchan, author Twinkle Khanna, Karan Johar, actress Sonali Bendre, Gayatri Oberoi and other stars gathered together at designer duo Abu Jani and Sandeep Khosla's Diwali party in Mumbai. It was indeed a star-studded night. Shweta and Navya (the mother-daughter duo) were twinning in white. Shweta wore a white sari while Navya opted for a lehenga, both the costumes were designed by Abu Jani and Sandeep Khosla. The pictures from the Diwali bash were shared by the designer duo on Instagram. Abhishek Bachchan looked dapper in a sky blue kurta and white pyjama.

Shweta, Abhishek and Navya, along with others posed for a happy picture. (Shweta and Abhishek are children of superstar Amitabh Bachchan).

When the spotlight followed Shweta and Navya.

When Diwali is full of love and jaegers

Promoted
Listen to the latest songs, only on JioSaavn.com
Salman Khan's sister Arpita, brother-in-law Aayush also hosted a pre-Diwali party at their residence on Friday night. The party was attended by the entire Khan family, Shah Rukh Khan, Katrina Kaif and others.