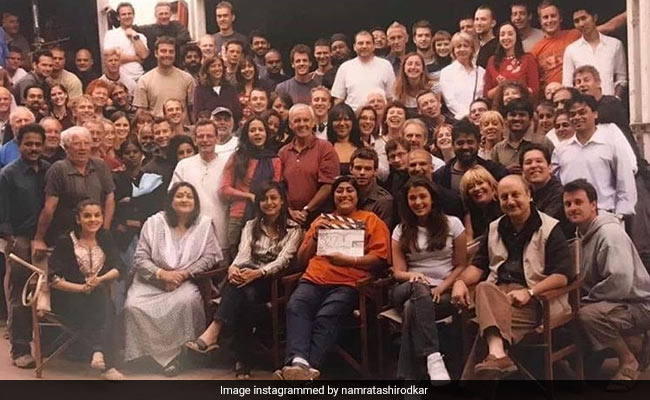 In the picture, Namrata and Aishwarya can be seen seated on the either side of Gurinder Chadha. "Three long months in London with this mammoth cast and crew... Enjoyed every single bit of it. So many memories attached to this one," Namrata Shirodkar added in caption.

This one is special!! My last day on the sets of my last film, Bride & Prejudice!! It was a wrap for our film and the end of a phase for me.!! Was getting home to be married 3 long months in London with this mammoth cast and crew... Enjoyed every single bit of it !! So many memories attached to this one... @sivan_santosh thanks for sharing this with me #gratitude #happiness #thosewerethedays @aishwaryaraibachchan_arb @gurinder.chadha @anupampkher @indypindy9 #throwbackthursday

Namrata Shirodkar, former Miss India, debuted in Bollywood in 1998 - her two feature films were Hero Hindustani and Mere Do Anmol Ratan while she had a cameo in Salman Khan and Twinkle Khanna's Jab Pyaar Kisise Hota Hai. She went on to star in Hindi films like Kachche Dhaage, Vaastav and Dil Vil Pyar Vyar. She also featured in critically acclaimed movie Astitva alongside Tabu.

Namrata Shirodkar met Mahesh Babu while filming Telugu film Vamsi. They started dating shortly after completing filming and got married five years later. Namrata Shirodkar and Mahesh Babu are parents to son Gautham, 13, and daughter Sitara, who will turn 8 in a couple of weeks.