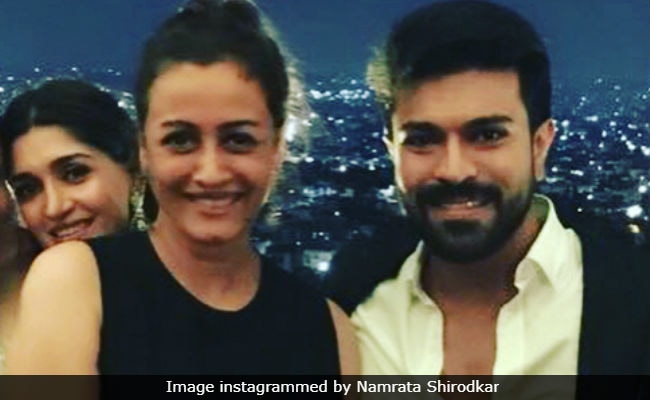 Namrata Shirodkar shared photos of - what she called - "the last of the fun nights" from designer Shriya Bhupal and Anindith Reddy's big fat Indian wedding. A party hosted by the Bhupals in Hyderabad's Falaknuma Palace on Monday brought Namrata Shirodakar in the same frame as actor Ram Charan but Namrata's actor husband Mahesh Babu was MIA. Namrata shared several photos from the post-wedding bash in which she was joined by one of her best friends Dia Bhupal, who is the bride's sister-in-law. Ram Charan is the groom's brother-in-law - his wife Upasana is Anindith's cousin. In another picture, Namrata and Dia posed with designer Sandeep Khosla.

The last of the fun nights #thebigfatindianwedding shriyaandanandiththankyou Shalu.Upsi and Dia for a fab evening

Shriya Bhupal and Anindith Reddy's grand wedding celebrations started last week with a pre-wedding party, which was followed by a fancy sangeet ceremony and then a simple ceremony which was solemnised by Sadhguru in Hyderabad on July 6.

Here are pictures from events leading up to Monday's post-wedding bash:

A post shared by Upasana Kamineni Konidela (@upasanakaminenikonidela) on Jul 6, 2018 at 11:56am PDT

A post shared by Upasana Kamineni Konidela (@upasanakaminenikonidela) on Jul 4, 2018 at 4:32am PDT

A post shared by Upasana Kamineni Konidela (@upasanakaminenikonidela) on Jul 9, 2018 at 3:37am PDT

Shriya Bhupal owns fashion label Shriya Som, which has been opted by sevral Bollywood celebs including Alia Bhatt and Shraddha Kapoor. Anindith Reddy is the grandson of Apollo hospitals chairman Pratap C Reddy. He is an entrepreneur and racing champ.