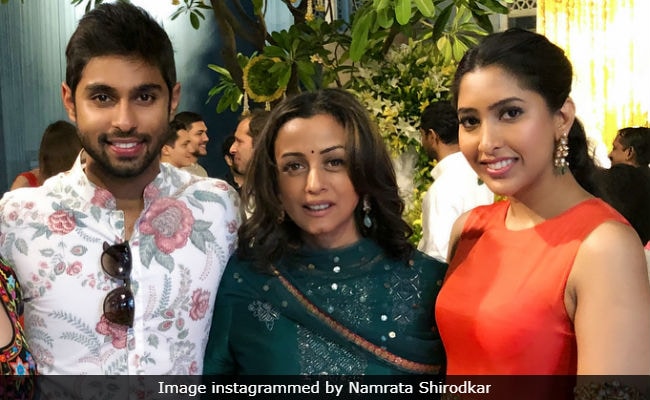 Designer Shriya Bhupal is marrying entrepreneur Anindith Reddy on July 8 but first, a pre-wedding celebration was in order, which was attended by Namrata Shirodkar, Ram Charan and his wife Upasana, who is the cousin of the groom. Namrata is one of Shriya's sister-in-law Dia Bhupal's close friends and she attended the pre-wedding bash in Hyderabad with her daughter Sitara. Namrata shared glimpses of "#thebigfatindianwedding" with her Instafam by posting a photo of herself and Dia with the bride and groom and captioned it: "Our very own Shriya and Anindith's pre-wedding celebrations. Wishing you two a life full of blessings and happiness." Shriya was dressed in a bright orange origami dress while Anindith wore a printed long jacket. Namrata looked pretty in a bottle green outfit while Dia Bhupal wore a contrast printed outfit.

A post shared by Upasana Kamineni Konidela (@upasanakaminenikonidela) on Jul 4, 2018 at 4:32am PDT

Before Thursday's ceremony in Hyderabad, Shriya Bhupal and Anindith Reddy hosted a grand ballroom party in at Chateau de Chantilly. Pictures of Shriya Bhupal, who looked glamourous in a Giambattista Valli gown, went crazy viral in May. Here are glimpses from the France event:

Anindith Reddy is the grandson of Apollo hospitals chairman Pratap C Reddy. He is an entrepreneur and racing champ.