Shriya Bhupal wore a Tarun Tahiliani saree during the pheras 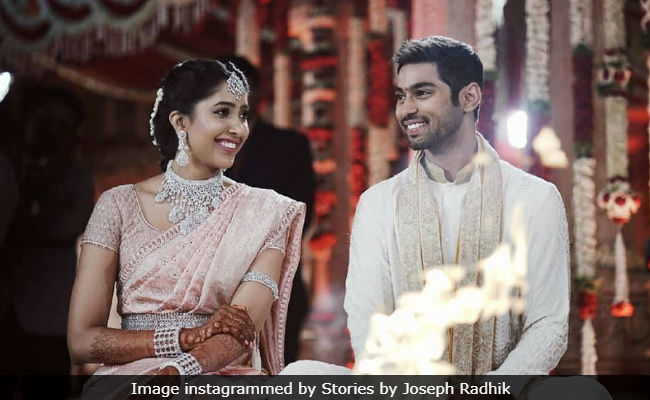 Designer Shriya Bhupal married entrepreneur Anindith Reddy in a ceremony solemnised by Sadhguru in Hyderabad on July 6. Shriya Bhupal wore an embellished Tarun Tahiliani saree with a spectacular diamond necklace and complementary add-ons, for the pheras. Actress Namrata Shirodkar, who is among Shriya's sister-in-law Dia's closest friends attended the ceremony, dressed in a Tarun Tahiliani lehenga. The Bhupal-Reddy wedding was spread over three days with a grand pre-wedding party followed by a fabulous sangeet ceremony on Thursday night.

A post shared by Stories by Joseph Radhik (@storiesbyjosephradhik) on Jul 6, 2018 at 8:07am PDT

Here's a picture of Namrata Shirodkar all dressed up for Shriya and Anindith's wedding:

The sangeet ceremony, which was held on Thursday, saw the arrival of the creme de la creme of the town. Anindith's cousin Upasana Kamineni attended the function with her actor husband Ram Chran. Namrata Shirodkar's plus one was her daughter Sitara.

Take a look at pictures from Shriya Bhupal and Anindith Reddy's sangeet:

Shriya gets married. (In a few hours) Before I leave to photograph the last leg of this wedding journey with @storiesbyjosephradhik , here's a (timeless!) portrait from last night of Shriya and the inquisitive little Bella. #love #bride #indianbride #bigfatindianwedding #eliesaabcouture With help from the ever awesome @namratasoni and @shivalichopra.

Shriya Bhupal is the owner of designer label Shriya Som, which has been worn by several Bollywood actresses including Alia Bhatt, Shraddha Kapoor and Radhika Apte. Shriya was engaged to Nagarjuna Akkineni's younger son Akhil Akkineni from December 2016 to February 2017. They dated for two years before getting engaged.

Promoted
Listen to the latest songs, only on JioSaavn.com
Anindith Reddy is the grandson of Apollo hospitals chairman Pratap C Reddy. He is an entrepreneur and racing champ.