Nafisa Ali, 64, Is Ready For Her New Film With Her "Cancer In Remission" 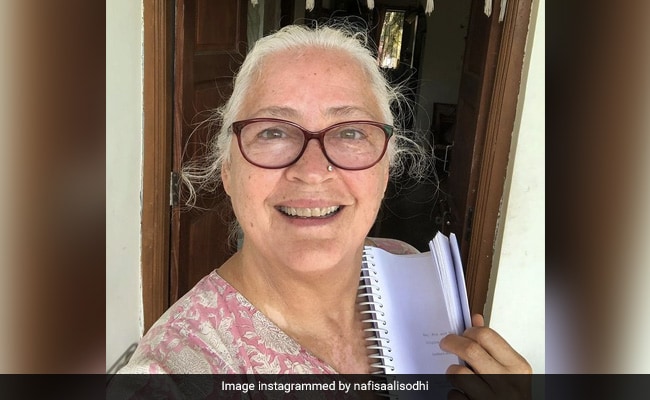 Congratulations, Nafisa Ali. The 64-year-old veteran actress, who is a cancer survivor, is all set to shoot for her new project in Bollywood. On Wednesday, Nafisa Ali, who was diagnosed with peritoneal and ovarian cancer in November 2018, announced that she is prepping for her new film with her "cancer in remission." She was last seen in the 2018 film Saheb, Biwi Aur Gangster 3. Sharing a photo of herself holding a script of her new project, the actress, who lives in Goa, stated that she was heading to Mumbai to shoot for the film. She wrote: "Reading a film script after ages ...off to Mumbai to act after years with my cancer in remission. I am so looking forward to a creative medium." Nafisa Ali is a former Miss India.

A few months after Saheb, Biwi Aur Gangster 3 released in July, Nafisa Ali revealed that she had been diagnosed with peritoneal and ovarian cancer.

During her treatment, the actress also used to post pictures of herself after her chemotherapy sessions.

After her battle with cancer in July 2019, Nafisa Ali shared a post on Instagram asking for work in films, mainly roles "perfect for a senior actor." A part of her post, which trended big time on social media, read: "I am Nafisa Ali Sodhi and I would like an elegant role to portray in Indian cinema. So, looking for a perfect script as a senior actor, I need to work to express my emotions. I will not be dictated to."

Later, explaining the reason behind her 'looking for work' post in an interview with news agency PTI, Nafisa said: "My message was to send a greeting and say, 'I am medically certified as cancer-free.' I wanted to share it with my industry and everyone. I am a cancer warrior and I have overcome it and I want to celebrate my life. I want to celebrate that I am ok, I am not sick anymore, if there is work for me then I am happy to do that work. I act in a film once in a while and enjoy it. Acting is not my profession, it is my passion."

Nafisa Ali is known for her roles in films such as Junoon, Major Saab, Bewafaa, Life In A... Metro and Yamla Pagla Deewana. She was last seen in Saheb Biwi Aur Gangster 3.