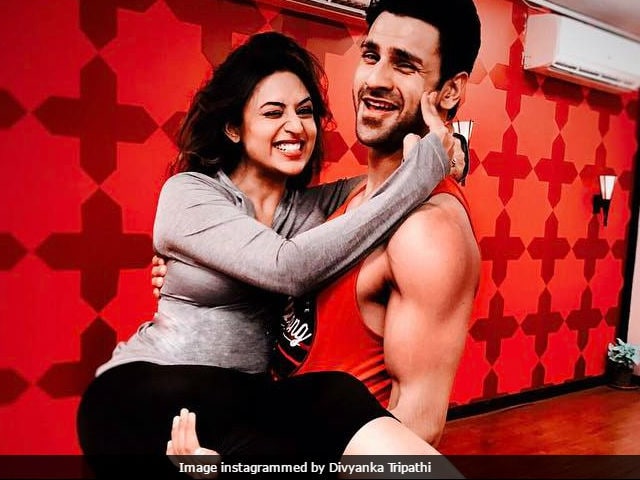 New Delhi: Actor couple Divyanka Tripathi and Vivek Dahiya's upcoming week in Nach Baliye 8 will be slightly tough. The Yeh Hai Mohabbatein actress will not be able to perform in the next episode due to her back pain because of which she has been advised bed rest. Divyanka, 32, shared a picture on Instagram, and captioned it: "An annoyed me when my back pain coercively leaves me bed-ridden. (sic)" Divyanka, who injured herself a few years ago while rehearsing for an award show performance, told SpotboyE that she won't perform this week. She said: "Yes it's true, it's due to some old spondylitis and spasm."

An annoyed me when my back pain coercively leaves me bed-ridden. #NothingToDo? #MakeInstaPosts!

A post shared by Divyanka Tripathi Dahiya (@divyankatripathidahiya) on Apr 16, 2017 at 6:09am PDT

Meanwhile, Vivek Dahiya shared a solo picture of himself from the backstage of Nach Baliye 8, dressed for his performance, and said: "As actors we are blessed to get the opportunity to experiment! A new hat to don every week! (sic)"

As actors we are blessed to get the opportunity to experiment! A new hat to don every week! #LoveMyJob #NachBaliye8

Promoted
Listen to the latest songs, only on JioSaavn.com
Divyanka Tripathi and Vivek Dahiya are favourites to win Nach Baliye 8 but this week may be a hurdle in their journey. In the previous seasons of the show, many participants have been allowed to perform solo or with their choreographer, in case their partner was injured or unwell. But their scores were generally low due to the absence of their companion.