"When I was prepping for Mimi, I knew that Mimi and Raj's bond was unique and special," wrote Kriti Sanon 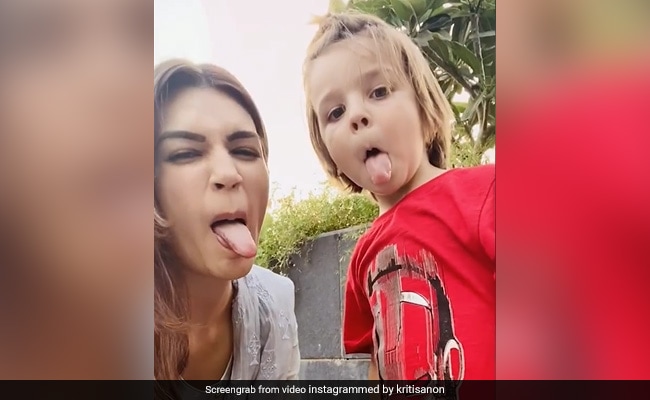 Kriti Sanon and little Jacob's adorable chemistry in Mimi has already stole our hearts and on Wednesday, the actress shared the story behind their "unique and special" bond. Kriti Sanon starred as Jacob's surrogate mother in the Laxman Utekar-directed film. Sharing a video comprising her cute moments with the kid on the sets of the film, Kriti Sanon wrote: "Oh my blue eyed son... When I was prepping for Mimi, I knew that Mimi and Raj's bond was unique and special... she was his best friend, and he was her everything! I knew that I wanted Jacob to love me and to be so comfortable with me that on the set, after his own parents, he looks for Me! He knew me as Mimi and not Kriti...I became a child with him and he opened up his arms!"

On a random day, Jacob made Kriti Sanon's heart melt. How? By just adorable saying, "I love you, Mimi." The actress wrote: "I remember the day he randomly said 'I love you Mimi' and my heart just melted! What a brilliant bright kid...I love you, Jacob!"

Earlier this month, Kriti Sanon shared her experience of shooting for the film with a kid in an Instagram post. "Always keep the child within you alive! It'll help you in shooting," she captioned the video. Take a look:

Mimi opened to positive reviews last month. In his review for NDTV, film critic Saibal Chatterjee gave the film 2 stars out of 5 and wrote: "As a means to enhancing the social relevance of the story, the film appends a message to its fag-end but no mention can be made of what it is because that would be a spoiler. By the time Mimi runs its course - the film is never particularly pregnant with possibilities once it has played its womb-for-hire trump card - it manages to tell us that one need not give birth to be a parent."

How Anushka Sharma Reacts When Someone Says "Pack Up" On Set