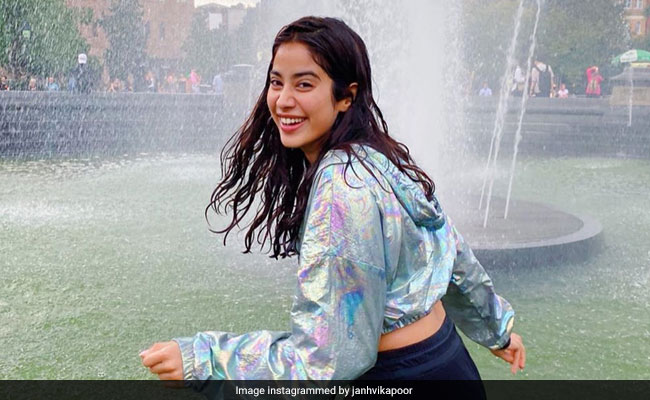 Janhvi Kapoor is making New York look so good. This is probably the first thought that will pop into your head as well, after you see the pictures shared by the actress on her Instagram profile, on Friday. The Dhadak actress, who is in the Big Apple to visit her sister Khushi Kapoor, posted a set of pictures, in which she can be seen happily posing next to a fountain. Dressed in an iridescent jacket and black shorts, Janhvi looks pretty as ever as she smiles with all her heart. "New York, I love you," read the caption on Janhvi's post, which received over 3 lakh likes within a few hours.

Take a look at some of the pictures here:

Janhvi Kapoor added more pictures from her New York vacation on her Instagram stories, which were later curated by several fan clubs dedicated to the actress, on Instagram. In one of the photographs, Janhvi and Khushi, walking hand-in-hand, could be seen strolling on the streets of New York." Check out the pictures here:

A post shared by MadhuriJiJanhviKhushi (@janhvikhushifan) on Sep 27, 2019 at 4:56am PDT

Janhvi, who has been accompanied by her father Boney Kapoor to New York, shared pictures from the family reunion and summed up the post in a word - "finally" and accompanied the post with a rainbow emoji.

Khushi Kapoor, who is pursuing a course in New York Film Academy, left for New York earlier this month. Meanwhile, Janhvi Kapoor has several projects in the pipeline, which include Gunjan Saxena - The Kargil Girl, Dostana 2 and Takht, all three of which will be backed by Dharma Productions. That's not it, she will also be seen in RoohiAfza, co-starring Rajkummar Rao.

Janhvi Kapoor and Khushi Kapoor are the daughters of film producer Boney Kapoor and late actress Sridevi. Janhvi made her Bollywood debut with the 2018 film Dhadak.