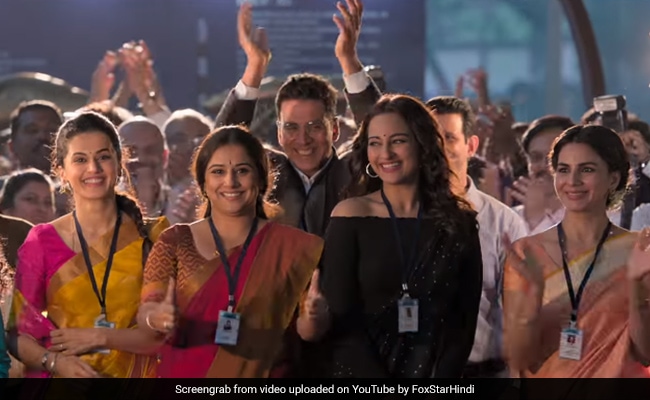 Akshay Kumar's film Mission Mangal, which also stars Vidya Balan, Tapsee Pannu, Sonakshi Sinha, Kirti Kulhari and Nithya Menen in lead roles, remains strong at the box office as it collected over Rs 8 crore on Monday, stated a report in Box Office India. The film, which released on Independence Day, has taken the box office by storm as it has now entered the 100 crore club. With the latest earnings, the overall collections so far have reached over Rs 105 crore. Mission Mangal surpassed films like Gully Boy and Super 30 to become the fifth Bollywood film of 2019 with highest Monday collections, reported Box Office India.

Mission Mangal is based on the Mars Orbiter Mission by the Indian Space Research Organisation (ISRO). It fictionalises the events leading up to the successful launch of Mangalyaan, which has been orbiting Mars since 2014.

In his review for NDTV, film critic Saibal Chatterjee 3 stars out of 5 and wrote: "Mission Mangal is ready to soar into the stratosphere even as many questions hover over the film. How advisable is turning a serious science-themed drama into a populist entertainer complete with high drama and over-simplified plotting? On the evidence of what pans out on the screen, there can be no clear answer. Some parts of Mission Mangal do work; others don't."