Milind Soman's Then And Now Post Prompts This Reaction From Anusha Dandekar: "How Are You Even Human?" 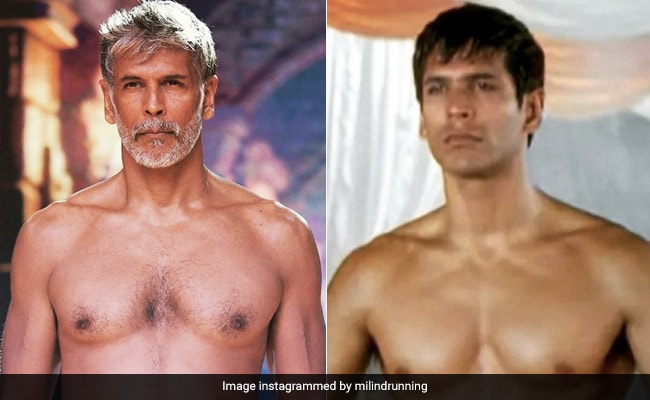 It's been 26 years since Milind Soman stepped out of the wooden box in Alisha Chinai's Made In India video. Milind, who is now 55, took a trip down memory lane and compiled a then-and-now post, featuring a glimpse of his present self and a still from the Made In India song. "26 years later..." he captioned his Throwback Thursday post and added: "Time flies." The song, released in 1995, made a star out of Milind Soman, who started his career as a model before venturing into acting. In an interview earlier this year, Alisha Chinai had revealed that before shooting Made In India, she only had Milind Soman in mind, which she made very clear to filmmaker Ken Ghosh, who created the video.

Take a look at Milind Soman's post here, which sent Instagram into a meltdown of sorts. Milind Soman's wife Ankita Konwar also left this comment with a bunch of red hearts. "Hello, you." Anusha Dandekar, who co-judges Supermodel Of The Year 2 with Milind Soman, also commented: "Ugh. How are you even a real human?"

Milind Soman's Instagram is a treasury of his throwback photos, especially from his modeling days. Last month, he packed four of his old photos, ranging from the Nineties to the Twenties, into one album for his fans. "One of my first fashion shoots to one of my last," he wrote.

In 1995, apart from starring in Alisha Chinai's Made In India music video, Milind Soman also featured in his first TV show A Mouthful Of Sky. He forayed into Bollywood in 2000 with Tarkieb and has starred in films such as Bajirao Mastani, Nakshatra, Say Salaam India, Rules: Pyaar Ka Superhit Formula and Chef. He was last seen in the web-series Paurashpur. He currently appears as a judge on reality TV show Supermodel Of The Year 2.