Memories Of Maldives: Sonakshi Sinha Is Busy Dreaming Of Sunset And Snacks 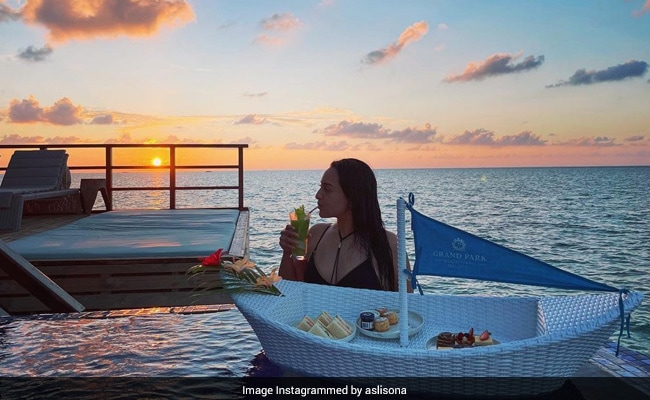 Sonakshi Sinha is currently in Mumbai but her heart is stuck in the island nation of Maldives. So much so that she shared a throwback picture from her last visit to what can be termed as Bollywood stars' favourite holiday destination. On Friday, the actress shared a picture on her Instagram profile, in which she can be seen making the most of her me time as she sits back and enjoys the sunset with a floating meal by her side. Sonakshi looks stunning, dressed in black swimwear. She summed up her current state of thoughts with these words: "Take me back." Sonakshi's Instafam dropped heart emojis in the comments section of her post.

The actress loves to share posts from different facets of her life on Instagram. "My "oh it's still not Friday?" face," she wrote sharing this picture. Take a look:

Here's a "Sunday selfie," featuring Sonakshi Sinha. Check it out:

Sonakshi Sinha made her big Bollywood debut with the 2010 film Dabangg, opposite Salman Khan. She has starred in several super hit as well as a few critically acclaimed films like Rowdy Rathore, Son Of Sardaar, Dabangg 2, Holiday: A Soldier Is Never Off Duty, Lootera, Once Upon A Time In Mumbai Dobaara, R... Rajkumar, Action Jackson, Kalank andMission Mangal, among others.

Sonakshi's last theatrical release was Dabangg 3, co-starring Salman Khan. Her upcoming project is Bhuj: The Pride Of India, starring Ajay Devgn in the lead role. The film is slated to release on OTT platform Disney+Hotstar. She will also be seen in Bulbul Tarang, which will release on Netflix.