"Dancing with the kids of Umang. God bless you and love you all," he wrote 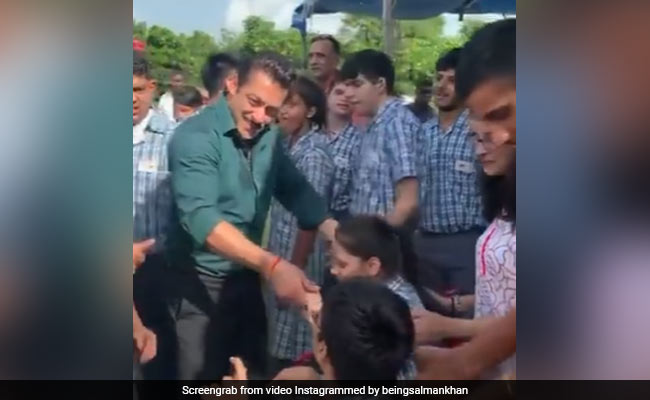 Salman Khan with special kids in the photo.(Image courtesy: beingsalmankhan)

Salman Khan marked the World Down Syndrome Day in the cutest way possible. The actor shared a throwback video of himself from the time when he danced with special children. He shared the video with his fans on Instagram. The video also featured Salman's Dabangg co-star Sonakshi Sinha and his Maine Pyaar Kyu Kiya co-star Bina Kak. All three can be seen shaking a leg and enjoying their hearts out with the special children in the video. While Salman wears a dark green coloured shirt, Bina Kak can be seen dressed in a white saree. Sonakshi Sinha on the other hand, can be seen wearing a green saree in the video. Sharing the video on Instagram, Salman wrote, "Dancing with the kids of Umang. God bless you and love you all. Bina Kak #Umang #DownSyndromeDay."

Salman Khan enjoys a huge fan following among moviegoers. Many of his fans reacted to the video. While some lauded him for his humanitarian efforts, others dropped heart emojis in the comments section of the post. One of the fans of the actor wrote, "You are god's child, man with golden heart."

Earlier last week, Bina had shared a throwback picture of herself with Salman and his bodyguard Shera. In the picture, the three can be seen seated in a jeep for a safari. "Out on a safari..from the archives," she wrote in the caption of the post. When an Instagram user asked Bina if the picture was recent , she replied by clarifying that the picture from last year.

Earlier this month, Salman revealed the release date of his much-awaited film Radhe: Your Most Wanted Bhai. He also shared a new poster of the film. The film is slated to release on May 13 this year.