"Love you, my favourite," was Ranveer Singh's reply to Alessandro's comment The Internet frequently buzzes with memes, with more than a little help from Ranveer Singh who has worn everything from a septum ring on a magazine cover to skirts on red carpets to a high ponytail at an award show. This time, however, his look screams haute fashion, given the fact that he was dressed in Gucci's collection and his OTT look inspiration was from the high-end fashion brand itself - Gucci's Creative Director Alessandro Michele. Ranveer kept sharing his looks on social media on Wednesday. For some he became the source of meme gold, other's referred to him as the Bollywood equivalent of Jared Leto. Alessandro Michele, who was the inspiration of Ranveer's look, going by the actor's caption ("Alessandro, my beloved," Ranveer captioned his posts), was all hearts. He dropped heart emojis on Ranveer's post. "Love you, my favourite," was Ranveer Singh's reply. 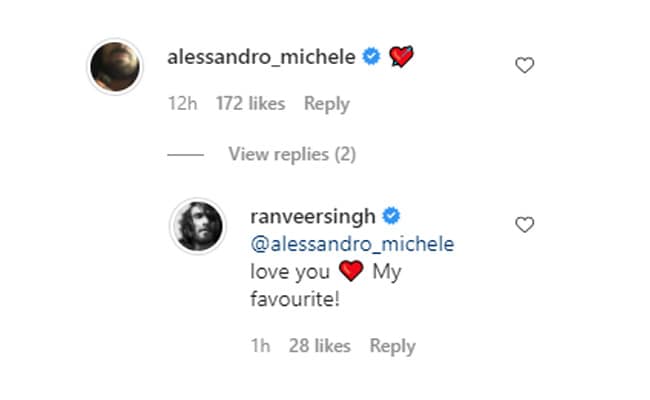 About Ranveer Singh's look - he picked metallic separates in shades of blue, threw over a Gucci trench coat. He accentuated his look with tinted sunglasses, a red hat, hair extension, a handbag and some gold jewelry (actually, a lot of gold jewelry). Bottom-line - Gender-neutral power dressing is Ranveer Singh's department and he aces it like a boss.