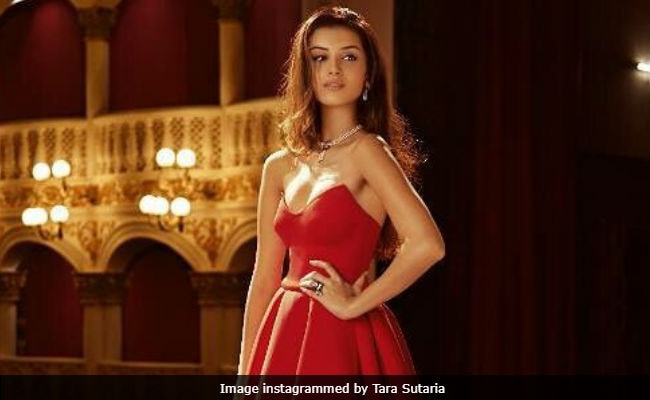 New Delhi: Karan Johar revealed the top three actors of his upcoming film Student Of The Year 2, of which one name may have come across as vaguely familiar - Tara Sutaria. The names of these television shows will jog your memory - The Suite Life of Karan & Kabir and Oye Jassie? No? Well, Tara is a Disney India star and she has featured in the aforementioned shows, which are the Indian adaptations of American sitcoms The Suite Life of Zack & Cody and Jessie. Tara Sutaria started as a VJ in Disney's Big Bada Boom. Later, she was seen in a cameo in another sitcom Shake It Up. Outside Disney, she's only appeared in TV show Entertainment Ke Liye Kuch Bhi Karega.

...And suddenly you know it's time to start something new and trust the magic of new beginnings! Firsts are always special, especially when you're blessed enough to be a part of the Dharma family. My journey begins... #SOTY2 #Repost @dharmamovies with @get_repost We are proud to present the new admission to the class of 2018, the girl who is in it to win it - @tarasutaria__ ! #SOTY2 @tigerjackieshroff @karanjohar @apoorva1972 @punitdmalhotra @foxstarhindii

Before her stint with Disney (from 2010 to 2013), Tara Sutaria gained popularity as a singer. Tara, who was born in Mumbai, is a trained singer and she has performed with artistes such as Louiz Banks and Mikey McCleary. Tara Sutaria has also been associated with the National Centre for the Performing Arts for over a decade. Tara also performed at the Royal Opera House, Mumbai in 2016. Tara started her career as a singer when was only seven-years-old.

Tara is the daughter of Himanshu and Tina Sutaria and she also has a twin sister named Pia, who is a professional ballet dancer. Tara is apparently dating Rohan Mehra, son of late actor Vinod Mehra. Rohan Mehra, who will be debuting later this year in Saif Ali Khan's Baazaar, features frequently on Tara's Instagram posts and vice-versa. Read their captions for subtle hints:

Promoted
Listen to the latest songs, only on JioSaavn.com
Student Of The Year 2 is Tara Sutaria's big Bollywood break. Tara's co-stars are Tiger Shroff and Ananya Panday. Tiger Shroff, son of Jackie Shroff, has commercially successful films such as Baaghi 2 and Heropanti on his resume while Ananya is a newcomer in the Punit Malhotra-directed film.

And so it begins! The class of 2018! #SOTY2 #Repost @dharmamovies with @get_repost Give a warm welcome to the Class of 2018 at Saint Teresa! Ready or not, HERE WE GO! See you in theatres on 23rd November 2018! #SOTY2 @karanjohar @apoorva1972 @tigerjackieshroff @tarasutaria__ @ananyapanday @punitdmalhotra @foxstarhindi

Student Of The Year 2 will release in November.