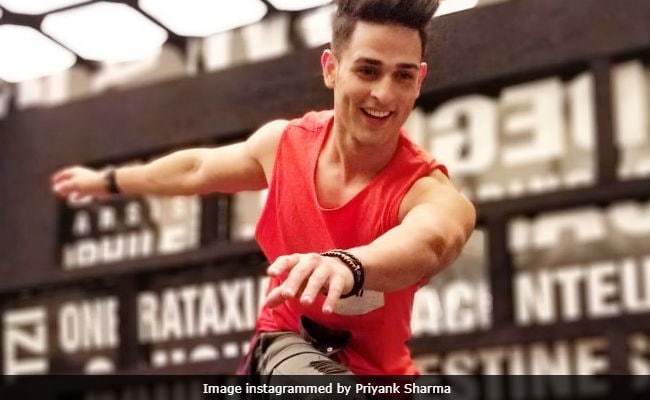 New Delhi: Priyank Sharma became a household name after starring in a string of reality shows - Bigg Boss 11, Splitsvilla 10 and Roadies Rising - but he's still struggling to make his Bollywood debut. Priyank recently appeared as a guest on the finale of reality show India's Next Superstars, which was co-judged by Karan Johar and Rohit Shetty. Based on Priyank's interaction with the Kuch Kuch Hota Hai director, folks thought that KJo will launch Priyank in an upcoming film - THB, Priyank's fans had their fingers crossed for Student Of The Year 2. But that ship has sailed. Karan Johar announced the lead cast of Student Of The Year 2 - Tiger Shroff (everyone knew that), Chunky Panday's daughter Ananya Panday and Disney India alumna Tara Sutaria.

Priyank Sharma's fans were upset and suggested that the Bigg Boss alumnus would have been better choice than Tiger Shroff. A section of Twitter still thinks that Priyank may appear in a supporting role or even as the antagonist in the Punit Malhotra-directed film.

Finally you did not cast @ipriyanksharmaa ..feeling very broken & annoyed & depressed. Feeling perplexed.. I thought he is going to be in @SOTYOfficial ..but you broke we Priyank fans hearts..

Any other male actor. Second lead..

Please sir.. Why don't cast @ipriyanksharmaa in Student of the year 2.. Why?? You praised him on india's next Superstar finale.. So feeling sad.. #SOTY2@DharmaMovies@punitdmalhotra @tigerjackieshroff

Promoted
Listen to the latest songs, only on JioSaavn.com
Fans were hopeful also because Priyank Sharma had networked his way into a Bollywood party (hosted by Shah Rukh Khan). He was Neha Dhupia's plus one to Kaajal Anand's birthday party where he met Karan Johar.

Apart from Priyank, Twitter hoped that India's Next Superstars winners Aman Gandotra and Natasha Bharadwaj would be included in the star cast. The winners of the reality show were promised film with Karan Johar and Rohit Shetty but apparently it won't be Student Of The Year. Rohit and Karan have collaborated on Simmba but Ranveer Singh and Sara Ali Khan have already been announced as the film's lead cast. Maybe, Aman and Natasha will get a role in it? Priyank was last seen in television series Swisswale Dulhaniya Le Jaenge, co-starring Tejasswi Prakash.