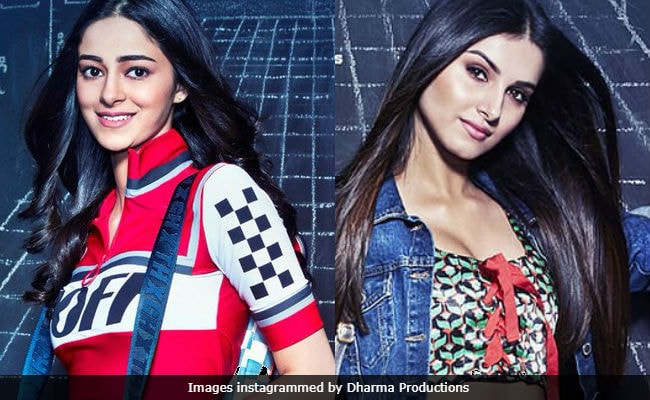 New Delhi: Karan Johar has announced the batch of 2018 for his upcoming film Student Of The Year 2, which is headlined by Tiger Shroff. Karan Johar announced the admissions of Chunky Panday's daughter Ananya and Disney India's Tara Sutaria to the SOTY family. Ananya Panday made her high society debut at Le Bal in Paris in November last year. "Welcome to the movies and the class of 2018," Dharma Productions posted the message along with Ananya's first look. Ananya is the elder of Chunky and Bhavana Panday's two daughters. Recently, Chunky Panday told Mumbai Mirror that Ananya was born to be an actor. "My daughter is a born actor. She wouldn't have been born if she wasn't an actor," he said. Ananya is often spotted in the company of Shah Rukh Khan's daughter Suhana and Sanjay Kapoor's daughter Shanaya. Presenting Ananya Panday:

Now, Tara Sutaria - KJo's Dharma Productions described Tara as "the girl who is in it to win it" in its introductory post on social media. Tara Sutaria started her career as a VJ with Disney India and went to star in two of its sitcoms - Oye Jassie and The Suite Life of Karan & Kabir (Indian adaptations of Oye Jessie and The Suite Life of Zack & Cody).

We are proud to present the new admission to the class of 2018, the girl who is in it to win it - @tarasutaria__ ! #SOTY2 @tigerjackieshroff @karanjohar @apoorva1972 @punitdmalhotra @foxstarhindi

Student Of The Year 2 went on floors in Dehradun on Tuesday. Dharma Productions announced on social media: "Today, director Punit malhotra and his team begin their journey at Saint Teresa's with Tiger Shroff and the girls."

STUDENT OF THE YEAR 2 - DAY #1 on set. Today, director @punitdmalhotra and his team begin their journey at Saint Teresa's with @tigerjackieshroff & the girls. Give us a in the comments to wish them luck! @karanjohar @apoorva1972 @foxstarhindi . . . . #SOTY2 #studentoftheyear #tigershroff #karanjohar #karan #johar #onset #location #setlife #shootlife

Promoted
Listen to the latest songs, only on JioSaavn.com
Student Of The Year, which released in 2012, was directed by Karan Johar. He launched Sidharth Malhotra, Mahesh Bhatt's daughter Alia Bhatt and David Dhawan's son Varun with the film.

Student Of The Year 2 is expected to hit the screens in November.