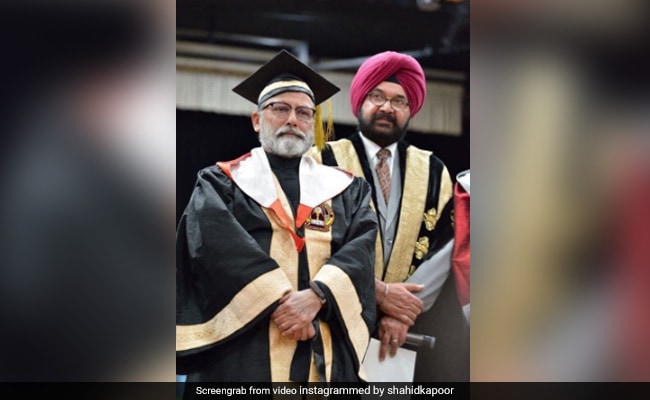 Shahid Kapoor, on Wednesday, posted a story on his Instagram profile, featuring his father Pankaj Kapur and it is setting father-son goals. In the story shared by the Batti Gul Meter Chalu actor, Pankaj Kapur can be seen dressed in a black and golden academic robe topped with an academic cap with a yellow tassel on his left. He is accompanied by another person in the picture in a similar robe. Sharing the picture, Shahid congratulated Pankaj Kapur on receiving the doctorate degree. "Congratulations, dad. Dr. Pankaj Kapur," wrote Shahid.

Have a look at Shahid's story here : 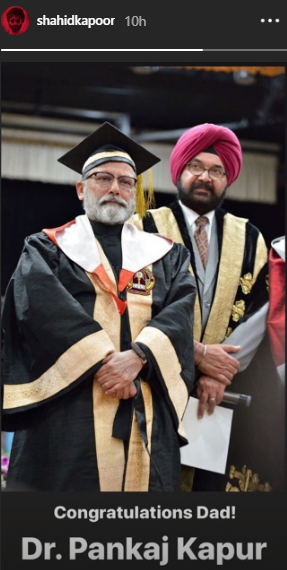 Screenshot of the Instagram story posted by Shahid Kapoor.

Happy Father's Day dad . U make me wanna be a better person . Thank you for being you.

Pankaj Kapur is best-known for his performances in films such as Jaane Bhi Do Yaaro, Mohan Joshi Hazir Ho!, Chameli Ki Shaadi, Main Prem Ki Diwani Hoon, Matru Ki Bijlee Ka Mandola, The Blue Umbrella, Halla Bol, Dharm, Sehar, Main Zinda Hoon and Shaandaar among others. He has three National Awards to his name for his performances in Raakh, Ek Doctor Ki Maut and Maqbool. He directed Shahid in the 2011 film Mausam which also starred Sonam Kapoor and Jaspal Bhatti. The 65-year-old actor will next be seen in Jersey, which stars Shahid Kapoor and Mrunal Thakur in leading roles.

On the professional front, Shahid Kapoor was last seen in the 2019 romantic drama Kabir Singh. He will next be seen in the sports drama Jersey directed by Gowtham Tinnanuri. Jersey is the Hindi remake of the 2019 Telugu movie with the same name.