Kangana Ranaut said: "We have promised that we haven't shown anything wrong about Rani Laxmi Bai so, they should support us" 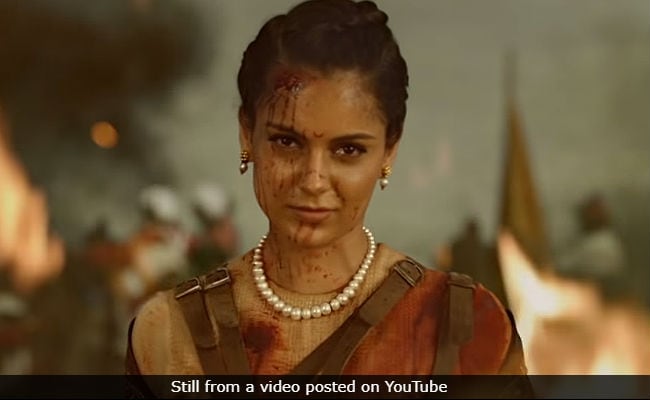 Kangana Ranaut in a still from Manikarnika: The Queen Of Jhansi. (Image courtesy: YouTube)

Actress Kangana Ranaut, star of today's big release Manikarnika: The Queen Of Jhansi, refused to apologise to Rajput fringe outfit Karni Sena for saying she'll 'destroy them' if they opposed the release of her film, reports news agency IANS. A spokesperson of the Karni Sena said that they never protested against the release of Manikarnika and that the name of their group was misused in the controversy. They also demanded an apology for the strong statement but Kangana told IANS: "I will not apologise to anybody. I have never apologised whenever I haven't made a mistake. We have promised that we haven't shown anything wrong about Rani Laxmi Bai in the film so, they should support us."

"Rani Laxmi Bai is not my relative and I feel she is daughter of the entire country so, we all should support the film. Rajput Karni Sena should not play their ego card with me because I am not here to say sorry to anyone," she added.

Last week, it was reported that the Karni Sena wrote a letter to the filmmakers, in which they allegedly warned them against "maligning Rani Laxmi Bai's image." As per the IANS report, they opposed a song sequence, in which Kangana as the Queen of Jhansi is seen dancing. At that time, Kangana issued a statement saying: "Four historians have certified Manikarnika, we have got censor certificate as well, Karni Sena has been conveyed this but they are continuing to harass me. If they don't stop then they should know I am also a Rajput and I will destroy each one of them."

Earlier, the Karni Sena had strongly opposed the release of Sanjay Leela Bhansali's "Padmaavat," starring Deepika Padukone as Rani Padmini of Chittor. The Karni Sena vandalised the film's sets and attacked Mr Bhansali when the film was in work-in-progress stage. At the time of the film's release, a bounty was placed on Deepika's head for her statements in favour of the film.

Manikarnika tells the story of Rani Laxmi Bai, who is counted among India's first freedom fighters. She lead Jhansi's battalion in the 1857 Mutiny against the East India Company. The film is co-directed by Kangana Ranaut and Krish.

Manikarnika opens in theatres on January 25 along with Thackeray, starring Nawazuddin Siddiqui.