"Sunkissed and Blessed," the actress wrote in the caption 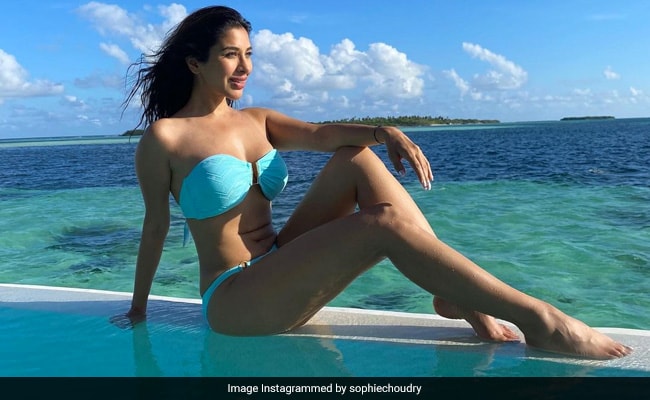 Hey, Sophie Choudry, we are loving your amazing Instagram entries from the Maldives. The actress is holidaying at the beach destination since the weekend. On Wednesday, Sophie Choudry posted a bunch of stunning pictures of herself and the scenic beauty of Maldives looks more breathtaking n her photos. Wearing a blue bikini, Sophie Choudry can be seen posing in the pool, as well as by the pool in her latest Instagram post. "Sunkissed and Blessed," she wrote in the caption and added: "Can't get over my incredible water villa and the views."

Every day, Sophie Choudry shares new pictures from her vacation and makes us green with envy. On Tuesday, she posted these photos and wrote: "How could she fear the rain when she has always been the storm...."

Sophie Choudry made her debut in Bollywood with the 2005 film Shaadi No 1, in which she co-starred with Fardeen Khan, Zayed Khan, Sharman Joshi, Esha Deol, Sanjay Dutt and Ayesha Takia. In the same year, she featured in two other Hindi film - Pyaar Ke Side Effects, in which Mallika Sherawat played the lead role, and I See You, featuring Arjun Rampal. Since then, Sophie has worked in several films, including Akshay Kumar and Vidya Balan's Heyy Babyy, Aggar, Speed, Money Hai Toh Honey Hai, Kidnap, Aa Dekhen Zara, Daddy Cool, Vedi and Shootout At Wadala.