Time stopped after Malaika Arora walked on the red carpet. 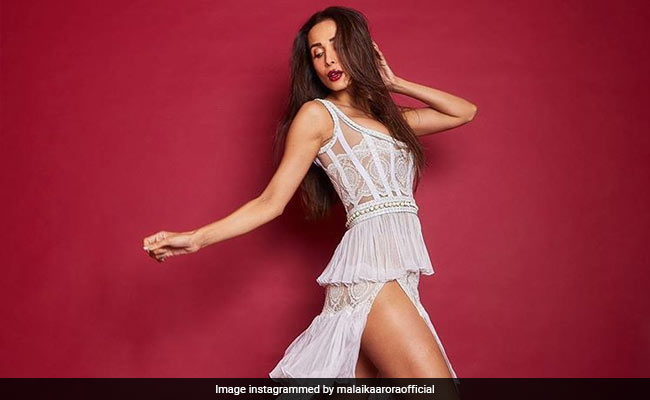 At the Vogue Beauty Awards 2019, Malaika Arora made a spectacular entry dressed in a white chiffon and French lace AADNEVIK gown with leather details and time stopped on the red carpet. Malaika Arora, who won the Fitspiration - Female award on Wednesday evening, shared pictures of her look on social media before she walked the red carpet and boy, the compliments she received for her style statement. Actor Arjun Kapoor, who is dating Malaika Arora, was among the many commenters who posted a fire emoticon to best describe Malaika's look for the Vogue Beauty Awards. For once, Arjun Kapoor chose not to troll Malaika - which he does quite frequently but more on that later.

Arjun Kapoor and Malaika Arora have been dating for quite some time now. On social media, Arjun Kapoor frequently trolls Malaika - sometimes for her poses and sometimes for the captions shared with the post. In June, Malaika shared a pictorial guide to nailing a ponytail. Arjun Kapoor's zinger - "Still not tied after 5 pictures" - still makes us LOL.

On some occasions the tables turn and Malaika ends up trolling Arjun Kapoor. On Arjun's 'vanity wala picture,' Malaika sneered at his inability to come up with a humorous caption. Arjun shared a picture in which he can be seen checking out his look in a hand mirror held by a team member. "Mirror mirror (not) on the wall!!! #vanitywalapic," Arjun captioned the post, for which Malaika wrote, "Wah kya humour."