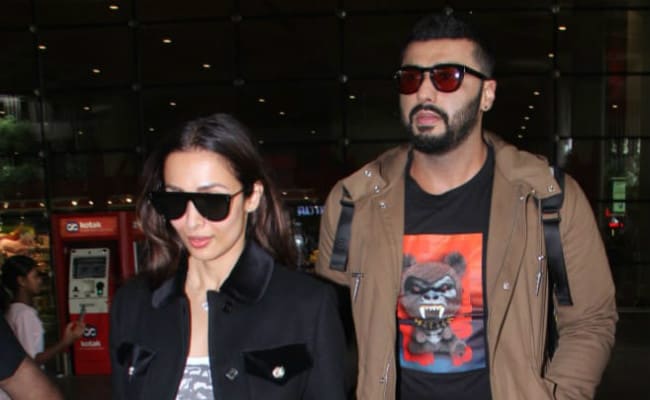 Malaika and Arjun made a trip to Melbourne together

Malaika Arora and Arjun Kapoor touched down in Mumbai from their Melbourne trip on Monday but are still enjoying their holiday hangover with Instagram photos. Arjun Kapoor, who presided over a special screening of India's Most Wanted at the Indian Film Festival of Melbourne, looks like also went sight-seeing with Malaika by his side. On Monday, he thanked the film festival and Melbourne for "a whirlwind yet amazing trip" with a photo of himself from the famous graffitied Hosier Lane in Melbourne city and Malaika's comment arrived soon enough. "Melbourne," she wrote and also dropped a heart emoji on Arjun's photo.

Thank you @mitulange @iffmelbourne & Melbourne for a whirlwind yet amazing trip... till we meet again... 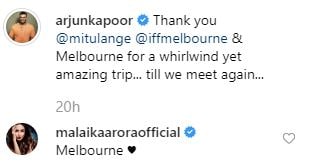 Meanwhile on Friday, it was a crazy scene outside the Palais Theatre in Melbourne when Malaika and Arjun checked into the film festival together. We got a glimpse of Arjun and Malaika's subtle PDA inside the auditorium when Arjun politely asked show host Karan Tacker to not flirt with Malaika. "You're lucky to be sitting next to her," Karan told Arjun when he hijacked Karan's mic to say: "Jaake peeche wali ke saath flirt karna (Flirt with someone else at the back please)."

Malaika and Arjun's hush-hush relationship came to the forefront when the duo began making public appearances together in the recent past. Arjun and Malaika have revealed they are dating in recent media interviews, thanking the press for respecting their privacy.