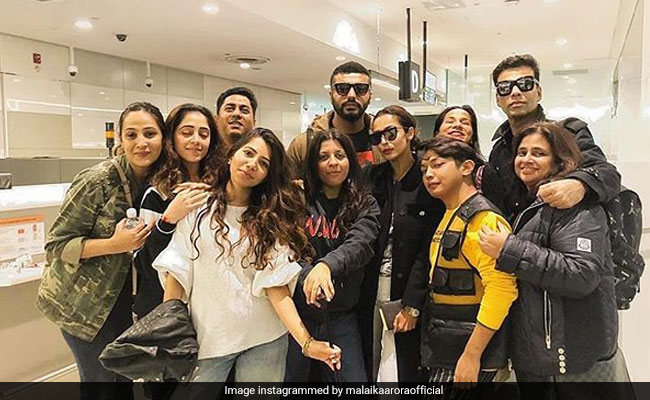 Malaika Arora, who accompanied Arjun Kapoor to Australia for the Indian Film Festival of Melbourne, wrapped the weekend trip with an airport photo, also featuring Karan Johar and Zoya Akhtar among other friends. Malaika and Arjun bid adieu to Melbourne with a simple caption: "Au revoir." Malaika, who rarely posts photos with Arjun, can be seen posing with her boyfriend in the photo. Malaika and Arjun flew into Melbourne to attend the film festival towards the end of last week and was spotted checking into the Palais Theatre together on Friday - he suited up in black and she stunning in scarlet.

The couple trended a great deal over the weekend because of Arjun Kapoor's ROFL reaction when host Karan Tacker complimented Malaika. In a video from inside one of the film festival events on Friday, which is crazy viral on the Internet now, host for the night Karan Tacker can be heard telling Malaika: "I must say that even after a 20-hour flight, you look absolutely gorgeous." Addressing Arjun, who was sitting right next to Malaika, Karan said: "You're lucky to be sitting next to her."

The video reveals that Arjun quickly got up from his seat and hijacked Karan's mic to say: "Jaake peeche wali ke saath flirt karna (Flirt with someone else at the back please)." Arjun's response sent the entire audience into a fit of laughter.

Arjun Kapoor, who presided over a special screening of his film India's Most Wanted, also Instagrammed a selfie with "two of the coolest, fun and most entertaining people" - Zoya Akhtar and Karan Johar.

2 of the coolest, fun & most entertaining people I know !!! Their films aren't too shabby either @zoieakhtar & @karanjohar !!! The Koffee King & The Gully Girl...

Malaika Arora and Arjun Kapoor recently opened up about their relationship. Speaking to news agency IANS, Malaika said in an interview that everyone deserves a second change in love: "When I talk of second chances, I'm thinking of making the most of second chances. I think everybody should be given a second chance."