Maanayata Dutt Working Out In This Video Is A Whole Mood

Maanayata Dutt can be seen actively working out in the video 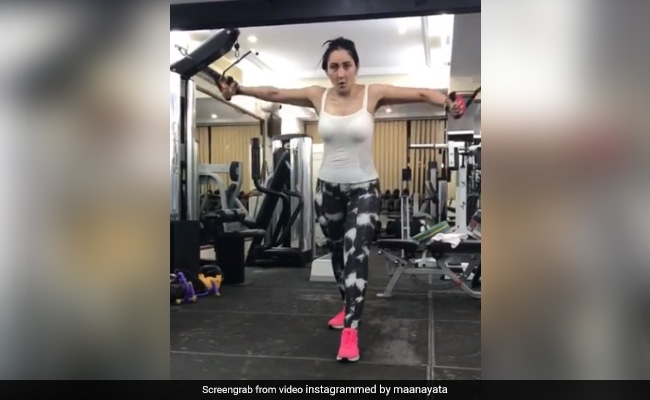 Maanayata in a still from the video. (courtesy maanayata)

Sanjay Dutt's wife Maanayata Dutt shared a brand new video on her Instagram profile recently, in which she can be seen working out vigorously. She can be seen doing cable cross-overs. Maanayata can be seen dressed in a white top and a pair of printed track pants. She picked bright pink shoes to go with it and had her hair tied in a bun. No caption needed. "Wow! Fit," commented actress Manisha Koirala, who starred as Sanjay Dutt's mother Nargis in the film Sanju. Ali Fazal dropped a few thumbs up emojis in the comments section of the post. "Well done," read a comment on her post.

Maanayata Dutt frequently shares posts with her family on her Instagram profile. Take a look at some of the posts here:

Sanjay Dutt married Maanayata in the year 2008 and the couple are parents to 10-year-old twins Shahraan and Iqra. The actor was earlier married to Richa Sharma, who died of brain tumour in 1996, with whom he has daughter Trishala. She stays with her grandparents in the Unites States Of America. Maanayata produced the 2019 film Prassthanam.