The "Beautiful Life" Of The Dutts, Summed By Maanayata In This Pic 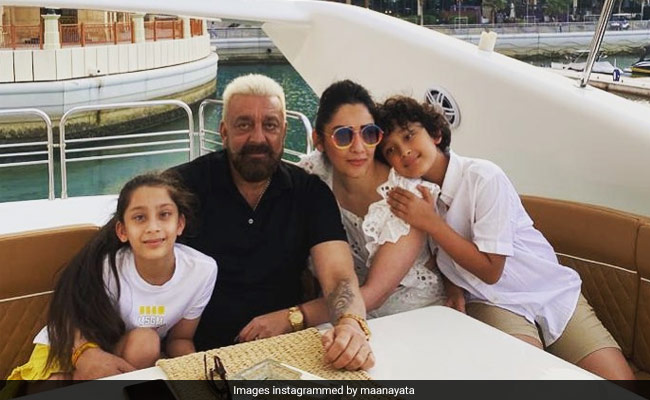 Maanayata Dutt's Instagram posts are all about family love and on Monday, she added one more to the list. Manaayata's post offers a sneak peek into the "beautiful life" of the Dutts and it is filled with love and positivity. Sanjay Dutt and Maanayata live in Dubai with their kids Shahraan and Iqra and her latest post is a snippet of their recent outing. The Dutt quartet can be seen chilling on a yacht - Sanjay Dutt, who underwent treatment for cancer last year, sports grey hair and is at the epicenter of the photo. "Blessed," Maanayata captioned her post and added her signature hashtags: "#Positivity", "#BeautifulLife", "#Grace," and "#Dutts."

Last year, Sanjay Dutt was diagnosed with cancer when he took a break from work because of medical treatment in Mumbai. Maanayata, who was in Dubai, flew in to be with the actor during his treatment period. They were soon reunited with Shahraan and Iqra in Dubai, which prompted this emotional post from Maanayata: "Today...I want to thank God for the gift of family. No complaints...No requests... just to be together, forever. Amen."

In terms of work, Sanjay Dutt was last seen in Sadak 2. His line-up of films includes KGF Chapter 2, Torbaaz, Bhuj: The Pride Of India and Shamshera.