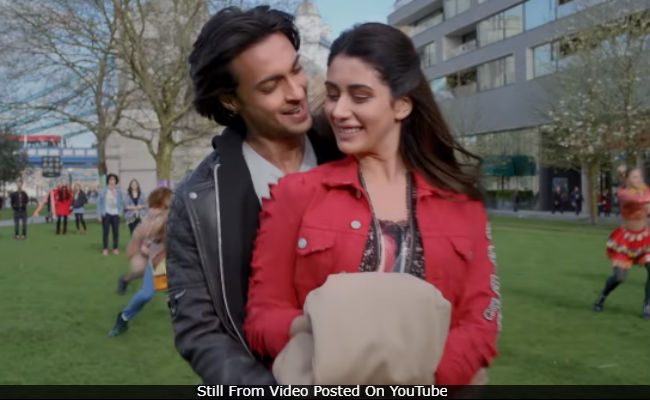 Loveratri first song is here. Titled Chogada, it is the ultimate Navratri song for us.Chogada opens on Aayush Sharma, the film's lead star, who appears to woo co-star Warina Hussain. The song has been picturised in front of the London Bridge and Vaibhavi Merchant's dance moves fit in the song just perfectly. Chogada is a peppy track that has the essence of any Gujarati song. Actor Ram Kapoor, who plays Aayush's dad in the film, also features in the song. Chogada is sung by Darshan Raval and Asees Kaur. The lyrics courtesy also goes to Darshal. "Dudes, keep your dandiya's ready kyunki iss gaane pe dance toh banta hai boss. Enjoy," tweeted Salman Khan, the producer of Loveratri, while releasing Chogada.

(Got the Chogada groove yet?)

Loveratri is a romantic drama set against the backdrop of Navratri in Gujarat. Aayush stars as a garba teacher from Baroda, who falls in love with an NRI, played by Warina, when she visits his town during the festival.

Both Aayush and Warina are debuting with Loveratri in Bollywood. Aayush is Salman's brother-in-law.

At the trailer launch of Loveratri, Salman revealed that Aayush rejected around 10 scripts before signing this film. "When Abhiraj Minawala (director) and Aayush heard the story, they agreed to do the film. Before that, I was getting kind of pissed off with him (Aayush) because I sent him about 9-10 scripts but he didn't like those," news agency IANS quoted Salman as saying.