Love In The Time Of COVID -19: A Glimpse Of Priyanka Chopra And Nick Jonas' Quarantine PDA

Let Priyanka Chopra and Nick Jonas be your guide 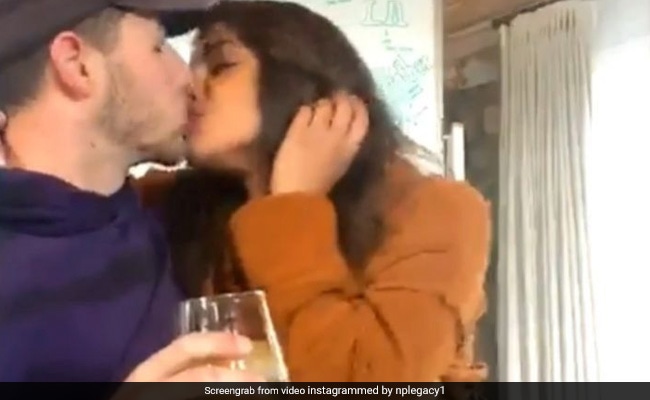 Nick and Priyanka in a still from the video. (courtesy: nplegacy1)

Priyanka Chopra and Nick Jonas, who have been quarantined for the last few weeks in New York, gave their Instafam a glimpse of their romance. On Thursday night, Priyanka and Nick did a live chat on Instagram with their friends, videos of which went viral and have been curated by several fan clubs. Priyanka signs off the video by kissing Nick. In the video, Priyanka can be seen dressed in a brown jumpsuit, while Nick can be seen complementing her in a navy blue t-shirt.

Priyanka Chopra recently interacted with the World Health Organisation's Dr Tedros Adhanom Ghebreyesus and Dr Maria Van Kerkhove, in which she asked them important questions pertaining to COVID -19. Priyanka, who also happens to be a UNICEF Goodwill ambassador, did the session through an IGTV live video, in which she asked some questions which were sent to her by fans.

and right now we're all searching for clarity. My friends at @WHO and @glblctzn graciously brought the doctors working on the front lines here to give us answers straight from the experts. Please take some time to watch my IG Live with Dr. Tedros (General-Director at W.H.O.) and Dr. Maria Van Kerkhove (Technical Lead for Covid-19) from @WHO, who answered some questions that so many of you sent in. Guys, let's make it our duty to donate to @WHO and stand in solidarity to help flatten the curve (link is up in my bio ) and please tag your friends and family below who are looking for answers and action steps Thank you so much Dr. Tedros and Dr. Maria for taking the time, and thank you @glblctzn for everything you do. Everyone please be responsible, stay home and stay safe #Covid19 #Coronavirus #WorldHealthOrganization

The Quantico actress shared a glimpse of her quarantine experience and described it as "crazy." In a video shared by her, Priyanka said, "This is such an insane time and all of our lives have been completely turned upside down. It feels like something out of a movie but it is not."

Join me tomorrow with Dr. Tedros and Maria Van Kerkhove from the @WHO , and Hugh Evans the CEO of @GlblCtzn on IG LIVE + Facebook at 12:30pm PST. Ask them all your questions about #Covid19 and get your answers straight from the source. Stay safe and see you tomorrow. pic.twitter.com/9SxG6t1V7r

Earlier this month, Priyanka Chopra and Nick Jonas were in India to celebrate Holi. On the work front, the actress was last seen in The Sky Is Pink. She will next be seen in Netflix's The White Tiger and We Can Be Heroes. Priyanka Chopra also has a film with actress-comedian Mindy Kaling in the pipeline.