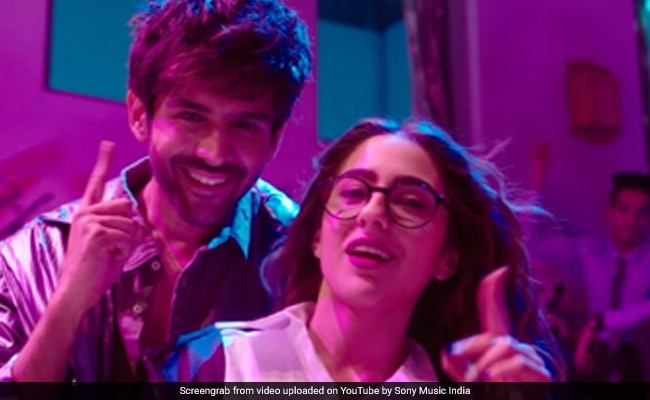 The makers of Love Aaj Kal dropped the second song from the film's playlist on Wednesday and we bet you will play it on loop. After releasing romantic track Shayad last week, the makers have now treated us to a party song, in which Sara Ali Khan and Kartik Aaryan give a 'twist' to Saif Ali Khan's groovy steps from the first Love Aaj Kal film (more on that later). The track features Kartik Aaryan as two different characters - one as Veer, who dances with Zoe (Sara Ali Khan) in 2020, and the other one as Raghu, who sings for Leena (Arushi Sharma) in the Nineties.

The groovy track, which shows different shades of love, features Kartik Aaryan and Sara Ali Khan dancing in neon-themed lights with flashy graffiti in the background. It also has glimpses of Kartik romancing Arushi Sharma in the 90s. Apart from Kartik and Sara's signature steps, the quirky background, neon-themed lights and colourful graffiti will remind you of Saif Ali Khan and Florence Brudenell-Bruce's song Twist from the first film.

Love Aaj Kal is Imtiaz Ali's second film with the same name. It shows two love stories - one set in 1990 and the other in 2020 just like the first film. The movie marks Sara, Kartik and debutant Arushi Sharma's first project together.Love Aaj Kalis slated to open in theatres on Valentine's Day.