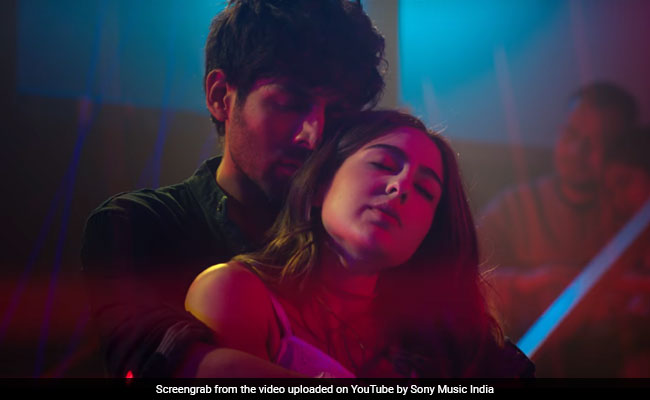 Sara and Kartik in a still from Shayad (courtesy YouTube)

The makers of Love Aaj Kal shared the first song from the film's playlist on Wednesday and it's all about love. Just like the trailer, the Love Aaj Kal song Shayad also has glimpses of two love stories - one set in 1990 and the other in 2020. Kartik Aaryan is the moonstruck hero of both the love stories. The song Shayad primarily focuses on Kartik's dual roles and his varied moods when in love. The Love Aaj Kal song begins with Kartik telling Sara Ali Khan that she's special. Sara, who yells at Kartik Aryan for not being able to express his feelings properly, breaks into a smile just as she turns away.

The song Shayad has glimpses of how far Kartik is ready to go when in love. In the 1990 love story, featuring actress Arushi Sharma, he elopes to meet his love interest in a train. In the romance set in 2020, Kartik struggles to come to terms with Sara's 'no time for love' approach. Shayadis a melodious number sung by Arijit Singh and has been composed by Pritam.

Love Aaj Kal  is Imtiaz Ali's second film with the same name. The first one, released in 2009, starred Sara's dad Saif Ali Khan and Deepika Padukone. The newLove Aaj Kal  pairs Sara Ali Khan and Kartik Aaryan for the first time. The movie is all set to hit screens on February 14, Valentine's Day.