Love Aaj Kal: A 'Typical Tuesday' In The Life Of The Amazingly Alliterative Sara Ali Khan 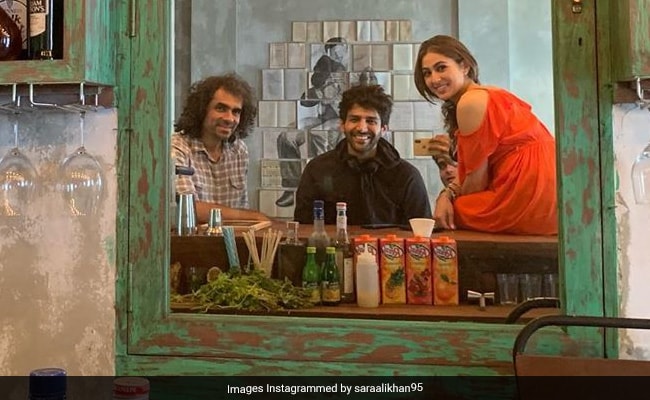 Sara Ali Khan's "typical Tuesday" looks anything but ordinary. The 24-year-old actress, who is currently busy with the promotional duties of her forthcoming film Love Aaj Kal, shared a BTS picture from the sets of the film, along with her co-star Kartik Aaryan and the film's director Imtiaz Ali. In the picture, the trio can be seen happily posing in front of a mirror. However, it is Sara Ali Khan's interesting caption that stole our hearts. Sara "took her caption to a T" (her words). In simple words, let's just say that it was replete with alliteration. Sara signed off her post with a social message and wrote: "This isn't a bar - it is our set and alcohol is injurious to health."

Sara captioned her post, "Typical Tuesday with the terrific trio. Tremendously excited to take to the theaters in ten days. Terribly touched that it's nearly the tail end. I really took my caption to a T. Love Aaj Kal 10 days to go. This isn't a bar - it is our set and alcohol is injurious to health."

Typical Tuesday with the Terrific Trio Tremendously excited to take Theatres in Ten days Terribly Touched that it's nearly the Tail end P.S I really took my caption to a T #LoveAajKal days to go P.P.S this isn't a bar- it is our set- and alcohol is injurious to health

Sara Ali Khan frequently shares posts from her Love Aaj Kal diaries on Instagram. Take a look at some of the posts here:

Shall I tell you the secret?? I thought I would- but #HaanMainGalat Song out tomorrow!! #LoveAajKal

Love Aaj Kal showcases two parallel love stories separated by time. The story that features Sara is set in 2020 and the other one that features Arushi Sharma, is set in the Nineties.

Love Aaj Kal is the second instalment of the 2009 film of the same name that featured Saif Ali Khan and Deepika Padukone in the lead roles. The film is slated to release on February 14.