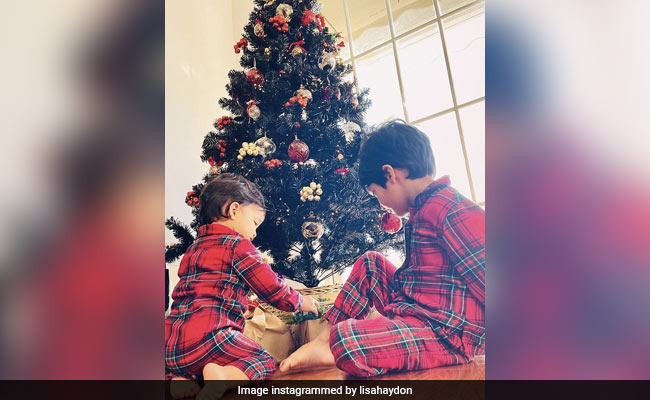 Model-actress Lisa Haydon shared a super cute candid photograph of her sons Zack and Leo on her Instagram profile on Saturday night. In the picture, the brother duo, twinning in red outfits, can be seen unwrapping their Christmas presents. Lisa,  sharing the picture on her Instagram, captioned the post: "Busted! Trying to unwrap a week before Christmas." The comments section of her post was filled up heart emojis from her friends and fans. Shibani Dandekar left a few heart emojis, so did actress Amy Jackson. Remarks like "cutest," and "aww cuties," kept popping up in the comments section of her post and we are not surprised at all.

Lisa and Dino  welcomed their second child Leo in February this year. Sharing a picture of Leo along with his brother Zack, Lisa wrote in her post: "My forever valentine - Yesterday was our 5 year anniversary of the day we met, on February 13th, one freaky Friday, life has never been the same since. Thank you hub for building family with me." She added the hashtag #HeartRevolution.

Model-turned actress Lisa Haydon, who stepped into Bollywood with the 2010 film Aisha( which starred Sonam Kapoor in the titular role), married entrepreneur Dino Lalvani in 2016 and the couple welcomed their first child Zack in the year 2017.