"Fish and chips for dinner. Yep, simple things," wrote Lisa in her caption 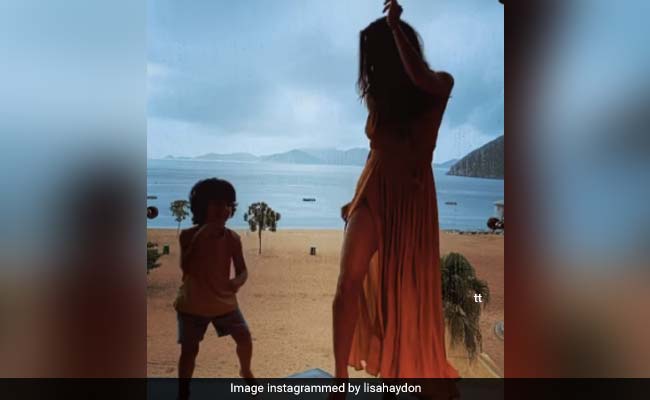 Lisa Haydon and Zack in a still from the clip. (Image courtesy: lisahaydon )

Lisa Haydon's son Zack once again featured on her Instagram profile and we just love it. The model-turned-actress, on Tuesday, shared a really adorable boomerang of herself and her son celebrating "simple things" in their lives. The video features Lisa and Zack dancing in their sea-facing home and the breathtaking view in the backdrop makes the whole clip a lot more mesmerising. Lisa looks stunning in an orange thigh-high slit dress while Zack looks cute as always in a sleeveless t-shirt and shorts. Sharing the short clip, Lisa wrote: "Fish and chips for dinner. Yep, simple things." Lisa's fans flooded her post with comments such as "super cute" and "lovely mother-son duo."

Check out the boomerang here:

Lisa Haydon married entrepreneur Dino Lalvani in 2016 and the couple welcomed their first child Zack together in the year 2017 and son Leo in February this year. The actress frequently treats her fans to adorable pictures of her kids. In April, she posted a photo of Zack climbing stairs at an outdoor location and wrote: "Weekend hikes with my baby lion... to him we are always climbing to get to the top of Pride Rock." For those who don't know, Pride Rock is a fictional place shown in the all-time favourite franchise The Lion King.

Weekend hikes with my baby lion... to him we are always climbing to get to the top of "Pride Rock".

Meanwhile, also check out other pictures of Zack and little Leo shared by Lisa.

Having ourselves a good ol' LA time

Lisa Haydon made her debut in Bollywood with Sonam Kapoor's Aisha, in which she appeared in a supporting role. She later went on to feature alongside Ajay Devgn, Sanjay Dutt and Kangana Ranaut in the 2011 film Rascals. In 2014, she featured in Queen, which marked her second film with Kangana Ranaut. Lisa is best-known for her performance in the 2014 film The Shaukeens and the 2016 film Housefull 3. Ae Dil Hai Mushkil remains Lisa Haydon's last film. Lisa Haydon has also been part of reality TV show India's Next Top Model and web-series The Trip.