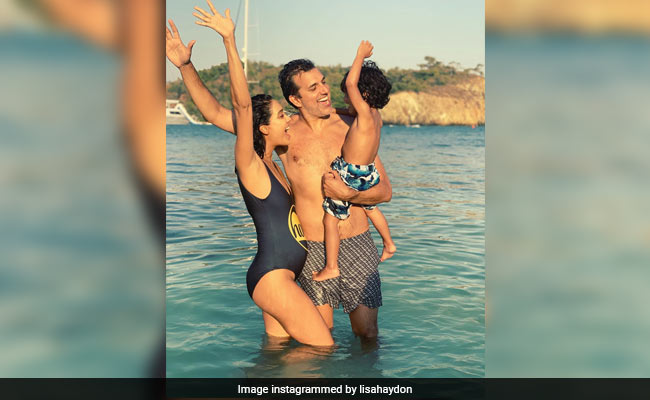 Lisa Haydon's latest Instagram post calls for congratulations. Why, you ask? Well, on Saturday, the 33-year-old actress announced her second pregnancy in Instagram post. In the picture, Lisa can be seen smiling with all her heart as she spends quality time with her husband Dino Lalvani and their son Zack. In the photograph, the model-turned-actress can be seen dressed in a black swimsuit and she can be sporting the pregnancy bump. Lisa cryptically announced the news of her pregnancy and wrote: "Party of four on the way."

Lisa's post was flooded with congratulatory wishes from fans and several stars. Lisa's Aisha co-star Sonam Kapoor congratulated the couple on the big news, so did mother-to-be Amy Jackson. Pooja Hegde, Gauhar Khan, Shibani Dandekar also congratulated Lisa and her family in the comments section. Without much ado, take a look at Lisa Haydon's post here:

Party of four on the way

Lisa Haydon married entrepreneur Dino Lalvani in the year 2016 and the couple welcomed their first child together in the year 2017. Lisa frequently shares pictures with her son Zack Lalvani on her Instagram profile and we simply love it when that happens.

Having ourselves a good ol' LA time

Shot this with @rohanshrestha for @india.today as you can see Zack was feeling pretty independent..

Lisa Haydon made her Bollywood debut with the 2010 film Aisha. She is best-known for her performance in films such as The Shaukeens, Queen and Housefull 3 among others. In terms of films, Lisa was last seen in the 2016 Karan Johar-directed Ae Dil Hai Mushkil, co-starring Ranbir Kapoor and Anushka Sharma. Lisa Haydon has also starred in the web-series The Trip and she was last seen as a judge in the television show Top Model India.