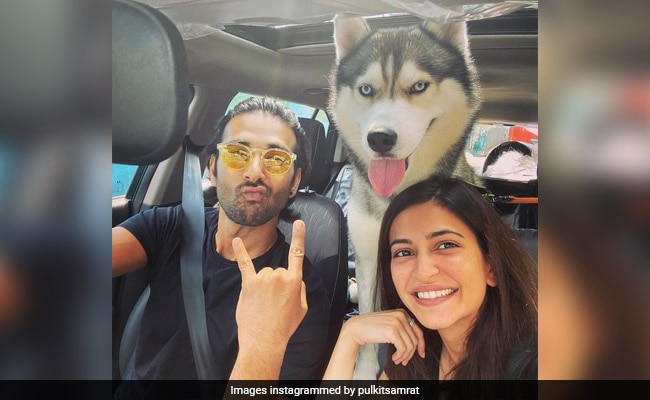 We just can't seem to get enough of  Pulkit Samrat and Kriti Kharbanda's latest Instagram entries. On Monday, the couple shared identical pictures from their long drive together. Oh, we forgot to mention, the couple were joined by their pet pooch Drogo. Sharing a happy picture with his girlfriend Kriti Kharbanda and their husky dog Drogo, Pulkit wrote in his post: "Long drives are love." Sharing the picture, Kriti wrote in her caption: "Favourites." Samantha Ruth Prabhu commented on her post: "Wohhhhhhh ... Look at that face ," while Siddhanth Kapoor commented: "Cutest thing I saw today." Drogo frequently features on Pulkit and Kriti's Instagram profiles.

Last month, Pulkit shared a happy greyscale picture of Kriti and their husky dog and he captioned it: "Date night," adding a heart emoji to the post. The couple, who have been staying together since a few months, frequently post pictures with Drogo. In August, they celebrated Drogo's 4th birthday. Sharing picture along with Drogo on his birthday, Pulkit wrote: "Happy Birthday my little Drogo."

Kriti Kharbanda and Pulkit Samrat, who have been dating for almost a year, co-starred in the 2018 film Veerey Ki Wedding. They also shared screen space in the comedy film Pagalpanti. The actors will also work together in Bejoy Nambiar's Taish. Kriti Kharbanda has featured in films such as Housefull 4 and Pagalpanti. She will next be seen in the Tamil film Vaan. Pulkit Samrat's next project is Haathi Mere Saathi, co-starring Rana Daggubati.