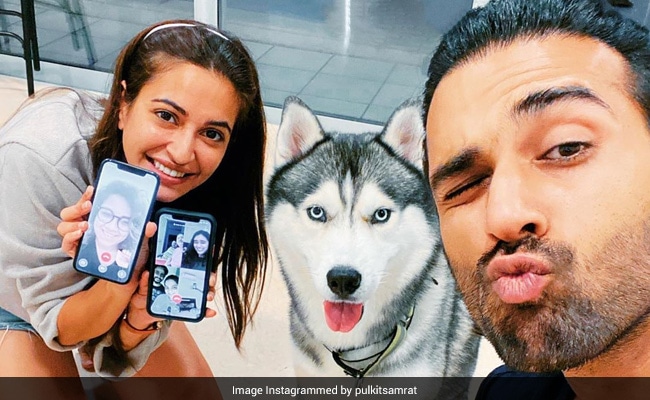 Pulkit Samrat and his girlfriend Kriti Kharbanda shared a few posts on their respective Instagram posts on Thursday and adorable can't even begin to describe them. The occasion? The couple were celebrating their pet pooch Drogo's fourth birthday. Sharing picture of themselves along with the husky dog, Pulkit wrote: "Happy Birthday my little Drogo." Later, Kriti shared the same post on her Instagram profile. Adding another post with Drogo, Kriti wrote: "He the cutest! He the handsomest! He the bestest! He the birthday boy. Our precious one turns 4." She added the hashtags #pawsome #pawmama #birthdayboy and #unconditionallove. So cute!

Take a look at Kriti and Pulkit's Instagram posts here:

The couple have been staying together since a few months. About moving in together with Pulkit, Kriti told Mumbai Mirror in an interview: "We had decided to stay in the same building to dodge traffic, but now, I am grateful to have him with me. I can't imagine how other couples who don't stay together are dealing with the lockdown." They frequently share pictures with each other on Instagram. Check out some of Pulkit and Kriti's posts together here. You can thank us later.

First I made him look like Champak, then made him gave me a champi! @pulkitsamrat heya! Thanks ya! #quarantinememories #yelocozyolo (this is officially my new motto in life)

Kriti Kharbanda featured in films such as Housefull 4 and Pagalpanti. She will next be seen in the Tamil film Vaan. Kriti and Pulkit co-starred in the 2018 film Veerey Ki Wedding. They also shared screen space in the comedy film Pagalpanti. The actors will co-star in Bejoy Nambiar's Taish.