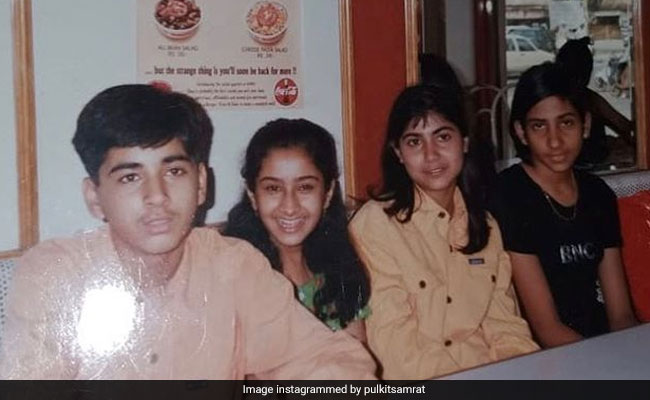 Pulkit Samrat, on Thursday, shared a nostalgia-dipped picture from the time when he was an 'ideal boy'. The actor made a trip down memory lane and posted a throwback picture that appears to be from his teenage days. In the photo, Pulkit can be seen sporting a shirt with his hair neatly combed and sitting on what appears to be a bench. "Adarsh balak...throwback Thursday," he captioned the photo. On Pulkit's post, his girlfriend, actress Kriti Kharbanda, left an ROFL comment that will leave you in splits. She wrote: "Kaafi blast from the past hai" with a laughing emoji. Check out Pulkit's old picture here:

And take a look at Kriti Kharbanda's comment here:

Pulkit Samrat and Kriti Kharbanda have been dating for quite some time now. The duo have been living together in Mumbai since the nationwide lockdown was imposed. Pulkit and Kriti, every now and then, share glimpses of their date nights and cooking sessions.

#blessed @pulkitsamrat you're the best!

Earlier, talking about living with Pulkit Samrat during the lockdown, Kriti Kharbanda told Mumbai Mirror: "We had decided to stay in the same building to dodge traffic, but now, I am grateful to have him with me. I can't imagine how other couples who don't stay together are dealing with the lockdown."

Pulkit Samrat was previously married to Salman Khan's rakhi-sister Shweta Rohira. However, things didn't work out between them and the duo separated in 2015.

Kriti Kharbanda and Pulkit Samrat have co-starred in films like Pagalpanti and Veerey Ki Wedding. They will next be seen together in Bejoy Namibar's Taish.