"She has been an earthing wire, balancing me on the set. If I do something wrong, I give a retake if she does not like it," said Pulkit 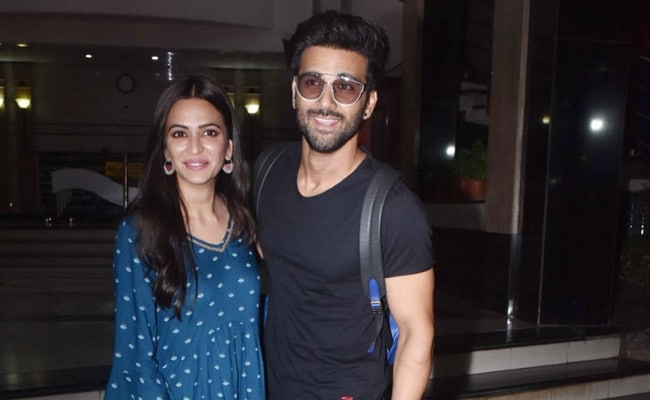 Kriti Kharbanda and Pulkit Samrat were photographed in Mumbai.

Pulkit Samrat, who has reportedly been dating his Pagalpanti co-star Kriti Kharbanda for quite some time now, revealed that working with the actress is "insane" and that he "looks for reassurance from her" on the sets. In an interview with the news agency IANS, the 35-year-old actor said that he wouldn't have "survived a couple of films" if Kriti Kharbanda wasn't his co-star in those projects. Pulkit and Kriti first shared screen space in Veerey Ki Wedding and now they will be seen together in Pagalpanti. The duo will also collaborate for Bejoy Nambiar's Taish. Talking about working with the 31-year-old actress, Pulkit said: "Working with her is insane. I wouldn't have been able to survive a couple of films if she was not my co-star."

Pulkit, who was previously married to Salman Khan's rakhi-sister Shweta Rohira, also mentioned in the interview that Kriti Kharbanda's opinion matters a lot to him. "Firstly, we share comfort and camaraderie. She has been an earthing wire, balancing me on the set. If I do something wrong, I give a retake if she does not like it. If she smiles at me after a shot, I know it's okay. I look for reassurance from her," Pulkit told IANS.

Earlier, it was reported that Pulkit and Kriti grew close to each other during the filming of Pagalpanti in the United Kingdom, stated a report in Mumbai Mirror. The publication even quoted a source saying that "Kriti was charmed by Pulkit's small but thoughtful gestures" during their stay in London. Speaking about his chemistry with Kriti, Pulkit Samrat told IANS: "I think Kriti and I have great onscreen chemistry, which translates in real life." Before Kriti Kharbanda, Pulkit Samrat was reportedly linked to actress Yami Gautam, with whom he has worked in films such as Junooniyat and Sanam Re.

In the same interview, Pulkit also shared the experience of shooting in Leeds, UK and said it was hard due to extreme weather conditions but they had "a lot of fun" during the shoot. "The weather did all the pagalpanti when we were shooting in Leeds. It took us 70 days to complete one sequence due to bad weather. We have shot even at minus three degree temperature and in supremely windy weather conditions, where the wind would blow at 40 kilometres an hour," said Pulkit.

"There were days we could not shoot for more than 15 minutes. We would shoot whenever the weather was a little favourable. We were shivering so much that we were unable to speak our dialogues. But we had a lot of fun during the shoot and Anees sir (the film's director) is a really nice person," he added.

Pulkti Samrat said that filming Pagalpanti was a new experience for him and he enjoyed doing this kind of comedy. "I haven't done this kind of a comedy before. It was a very new experience for me but I had a great time," he said and explained: "I find it exciting. I don't find it very difficult because I don't make a big deal of anything. The moment I make a big deal of anything, I can't do that thing. I have fun on the set and that translates onscreen."