Koffee With Karan 7: Spoilers Or No Spoilers, Sara Ali Khan And Janhvi Kapoor's Episode Is Going To Be Epic

"May or may not have spilled one too many koffee beans," Janhvi Kapoor captioned the post 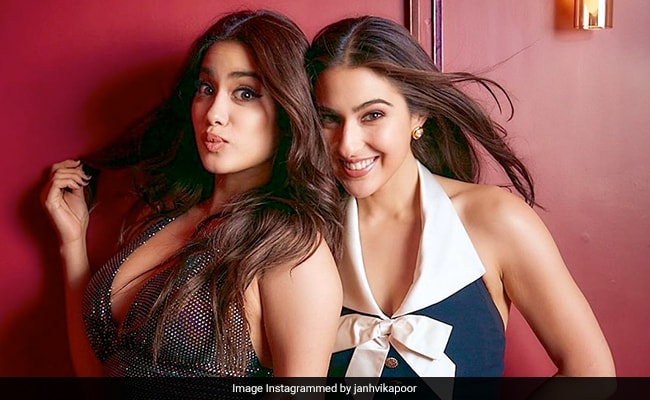 Yes, the first episode of Koffee With Karan 7, featuring Alia Bhatt and Ranveer Singh was entertaining but we just can't seem to wait for the second episode of the season, featuring Sara Ali Khan and Janhvi Kapoor. Ahead of the episode's premiere on Disney+Hotstar on Thursday, both Sara and Janhvi shared some stunning pictures together from a photo session and they shared it with an identical caption that read: "May or may not have spilled one too many koffee beans." In the comments section of the post, the official handle of Disney+Hotstar dropped a remark that read: "We may or may not be giving any spoilers, but this episode is going to be - (heart emoji, wonder emoji, wow emoji, heart-eyed emoji to name a few). You get the idea, right?

Both Sara Ali Khan and Janhvi Kapoor shared these pictures:

Speaking of the spilled beans so far (going by the teaser), show's host Karan Johar asked Sara to "name of a boy you feel like you want to date today." Sara, who was hesitant at first, said "Vijay Deverakonda" and Janhvi Kapoor's expression was too good to miss. BTW, during Koffee With Karan 6, Janhvi Kapoor had confessed that she had a crush on Vijay Deverakonda. Later, Vijay Deverakonda, tagged both Sara and Janhvi in his Instagram story and wrote: "I love how you say "Deverakonda" Cutest. Sending big hugs and my affection (heart emoticon)."

For those who didn't know, back in 2018, when Sara Ali Khan made her debut on the show, she was asked the same question and she trended big time after the former said on the celebrity talk show that she "wants to date" Kartik Aaryan. Sara Ali Khan and Kartik Aaryan, who co-starred in Imtiaz Ali's 2020 film Love Aaj Kal reportedly dated for a while.

Coming back to the current season, in the teaser, Sara was also asked by KJO, "One reason why your ex is your ex," and Sara replied, "Because he's everyone's ex."