Kiran Rao, Shruti Seth, Mini Mathur And More. Meet The 'Housewives Of Mumbai' In This Pic

Shruti Seth Instagrammed a photograph of the gang of best friends from The St. Regis with the caption: "The housewives of Mumbai," and credited Anaita for helping with the caption 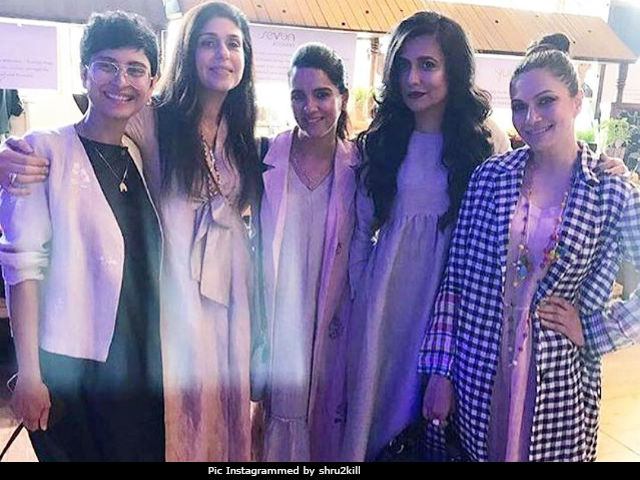 New Delhi: The Lakme Fashion Week saw industry friends and fashionistas break their fashionable brunch and lunch routine to catch up at the fashion gala. Saturday was one such day when filmmaker Kiran Rao, celebrity costume designer Anaita Shroff Adajania, TV star Shruti Seth, show host and television personality Mini Mathur and former VJ Maria Goretti, hung out together at the fashion event in Mumbai and looks like they had a lot to catch up on. Shruti Instagrammed a photograph of the gang of best friends from The St. Regis with the caption: "The housewives of Mumbai," and credited Anaita for helping with the caption. The caption appears to have been inspired by American reality TV show The Real Housewives, which tracks the life of celebrity wives across the US.

The stars had gathered to occupy the front row for Rina Singh's showcasing of her brand Ekaco. But ahead of 'the housewives' taking their seats, they goofed around on the side-lines. "Punking your best friends on camera? Yeah, even celebrities can't resist," Mini Mathur wrote along with a video she shared on Instagram.

For the uninitiated, 'the housewives of Mumbai' each have heavy resumes on record. Kiran Rao married Aamir Khan in 2005 and has produced her husband's films like Dhobi Ghat, Talaash and Dangal. Anaita, wife of filmmaker Homi Adajania, is the fashion director for Vogue India and has styled celebs in films like Love Aaj Kal and Cocktail, also directed by her husband.

Promoted
Listen to the latest songs, only on JioSaavn.com
Mini Mathur is married to director Kabir Khan and has hosted popular reality shows like Indian Idol, Sports Ka Superstar and Eife Bina Life.

Shruti Seth is married to Danish Aslam, who made his debut as a director with Deepika Padukone's Break Ke Baad. She is best known for her starring role in comedy series Shararat and has also featured in films like Rajneeti and Slumdog Millionaire. Maria Goretti, actor Arshad Warsi's wife, has remained a popular VJ for MTV.