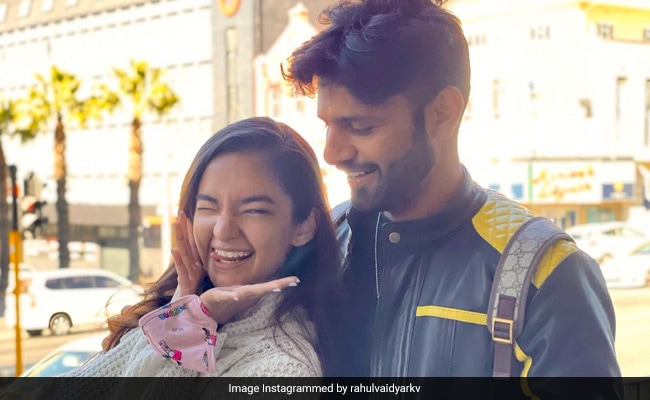 TV actress and former Khatron Ke Khiladi contestant Anushka Sen turned 19 today and her co-contestant Rahul Vaidya has an adorable birthday wish for her. Rahul marked Anushka's birthday with a special Instagram post. He shared two pictures of himself and Anushka Sen from the time when they shot for the reality show Khatron Ke Khiladi in Cape Town. He complemented the pictures with a sweet birthday note and wrote: "To my fav Anushka Sen, wish u a very happy 19th birthday. May u keep shining bigger by the day my lil girl." Anushka took no time to respond to Rahul Vaidya's birthday greetings. She dropped a comment on Rahul Vaidya's post and wrote: "Thank you so muchhh my bus partner!! You made Cape Town more fun and special for me."

Anushka Sen is spending her 19th birthday in Rajasthan's Udaipur. How we know this? Courtesy, Anushka's last two Instagram entries. While the most recent post captures Anushka posing in a white suit inside her hotel room, the other one features her posing near the lakeside of her hotel in Udaipur. Actor Arjun Bijlani, who was also a contestant on Khatron Ke Khiladi, commented on Anushka's post and wrote: "Happy birthday."

Check out the posts here:

Anushka Sen began her acting career in 2009 with the TV show Yahaan Main Ghar Ghar Kheli. She has appeared in several TV shows like Baal Veer, Internet Wala Love and Devon Ke Dev.....Mahadev. She is best known for playing the role of Rani Lakshmi Bai in the period-drama Jhansi Ki Raani.