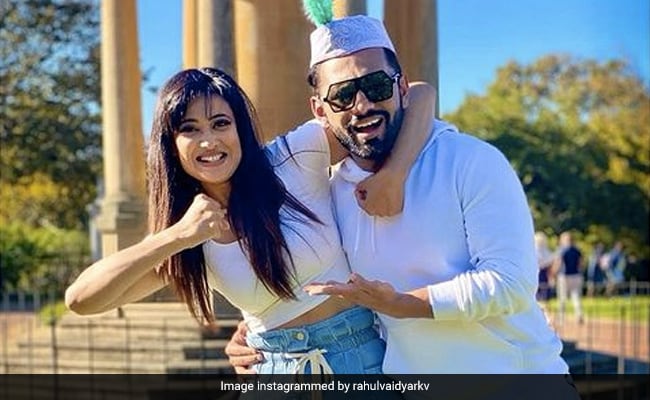 It is no secret that Rahul Vaidya is a talented singer and performer. In his recent stint in the reality TV show, Bigg Boss, fans got to see that the 33-year-old is also a good lyricist. And Rahul has been consistently proving that he has a gift with words and all his funny and catchy Instagram captions are proof. Rahul, who is currently in Cape Town for the shoot of the reality show Khatron Ke Khiladi 11, has been using his witty captions to describe his co-contestants on the show. The latest subject of Rahul's Instagram feed is actress Shweta Tiwari.

Sharing two photos where Rahul and Shweta are seen in a goofy mood, the singer wrote, "Ye confirm ho gaya mujhko ye ladki fire hai, likhenge tujhe lamba rap hum aise shayar hain (It has been confirmed that this girl is fire, I am such a poet that I will write you a long rap song).”

In the pictures, the two are seen twinning in white ensembles. While Shweta is seen in a white crop top with denim pants, Rahul is seen in a sweatshirt and jogger pants. The duo's chemistry and camaraderie seemed to be a huge hit with fans who flooded the comment section with heart and fire emoticons.

This is not the first time Rahul has had words for praise for the members of the Khatron Ke Khiladi 11 team. Recently, the singer also shared an image with director Rohit Shetty, who is also hosting the stunt-based reality show. About Rohit, Rahul said, "Boss Man! Sir, you are as real as the emotion in your every film! You have my respect and love."

Similarly, he also shared a post praising actress Anushka Sen, who is another contestant on the show. "She is only 18, but you all will be surprised when you see her do the stunts! Suljha hua baccha (A sorted child).”

Rahul rose to fame with his appearance on the singing reality show, Indian Idol Season 1. He also appeared on Jo Jeeta Wohi Super Star and Music Ka Maha Muqqabla. He was the first runner-up in Bigg Boss 14. He is currently dating television actress Disha Parmar.

Anita Hassanandani Takes A Break From Acting After Birth Of Baby: "Will Resume Work When I'm Ready"