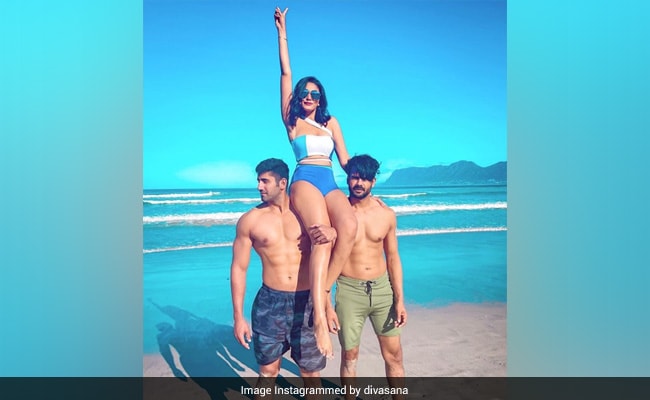 TV actress Sana Makbul, who is in Cape Town, is gearing up for the upcoming season of the reality show Khatron Ke Khiladi. Before the shoot begins, she has been enjoying her time in the city. Sana's new Instagram upload is the latest addition to her Cape Town diaries and her post is giving us major Dostana vibes". On Tuesday, the Iss Pyaar Ko Kya Naam Doon actress posted a few pictures of herself from the beach on Instagram. The pictures also feature TV celebrities Varun Sood and Vishal Aditya Singh who will also participate in Khatron Ke Khiladi: Season 11.

In the first photo, Khatron Ke Khiladi squad can be seen posing together, as both Varun and Vishal lift Sana on their shoulders. In the second picture, the trio is standing together. The third picture is a selfie in which we see Sana at the forefront. Varun and Vishal are standing behind her.

While Sana looks stunning in a blue and white swimsuit, both Varun and Vishal are rocking their shirtless look and sporting shorts in the pictures.

Sana wrote a quirky caption in her post. She quoted Tarun Mansukhani's 2008 film Dostana in her caption. The actress also informed her Instafam that the trio took their masks off only for pictures. She wrote, "Dostana vibes...P.S mask off only for pictures." She added hashtags such as #kkk11 #khatronkekhiladi #kkkboys #kkkgirl #capetown #strongbeasts #beach #dostana #blueocean #bikkini #shirtlessguys #khatronkekhiladi #colours #colourstv."

Sana Makbul compared the trio with the star cast of Dostana. The 2008 film featured Priyanka Chopra, John Abraham and Abhishek Bachchan as leads. Priyanka, John and Abhishek were cast as friends who live in the same apartment. The squad shared a close bond in the 2008 film. The star cast wore beachwear in a few scenes which are still remembered by the cinephiles. Dostana was directed by Tarun Mansukhani. Karan Johar produced the movie. Karan is now gearing up for Dostana 2, the second installment of the Dostana franchise

Coming back to Sana Makbul's latest post, earlier both Varun Sood and Vishal Aditya Singh had posted the same pictures on their respective Instagram handles. However, they wrote different captions in their posts. Varun wrote, "A day on the beach." Vishal's caption read, "Sunny side up #kkk11."

Lately, Sana Makbul has been posting glimpses of her Cape Town diaries on her Instagram handle. Take a look at a few posts here.